Post-Gazette: President Obama to Return to Carnegie Mellon to Highlight Importance of Manufacturing

Little more than a year after vowing that the United States would “move forward” out of an economic recession without returning “to the pre-crisis status quo” during a speech delivered in Carnegie Mellon University’s Wiegand Gymnasium, President Barack Obama is planning to return to CMU on Friday, June 24 to discuss the importance of manufacturing to the U.S. economy. 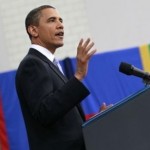 The Post-Gazette has posted a brief item detailing the scheduled visit, during which the President “will present steps that government, industry and universities will take together to create new industries and new jobs. He will discuss cross-cutting technologies meant to enhance the global competitiveness of U.S. manufacturing and speed ideas from the drawing board to the manufacturing floor,” the paper is reporting.

President Obama is no stranger to CMU or the Steel City.  On June 2 of last year, he cited Pittsburgh as an example of an American city that had successfully adapted to a rapidly changing economic environment to “reemerge as a center for technology, green jobs, health care, and education.”

In addition to that speech, in which he also touched upon the oil spill crisis in the Gulf of Mexico and the need for the private sector to truly buy-in to U.S. clean energy efforts, President Obama also visited Carnegie Mellon in June of 2008 while campaigning for the presidency.

Participating in a wide-ranging panel discussion with the likes of General Motors chairman W. Richard Wagoner and U.S. Steel chairman John Surma, the then-Senator (and not-quite Democratic nominee) emphasized the dangers of the country’s continued dependence on foreign oil and the importance of offering each child “a world-class education.”

In 2009, the President also selected Pittsburgh to be the first non-capital city to host the G20 Summit, the yearly meeting of representatives of the world’s most advanced and rising economic engines.

Pittsburgh, President Obama said at the time, “represents the transition of the U.S. economy from industrial state to a mix of strong industry — steel — but also now biotech and clean energy. It has transformed itself, after some very tough times, into a city that’s competing in the world economy.”

Check back for next week for coverage of President Obama’s third visit to Carnegie Mellon.