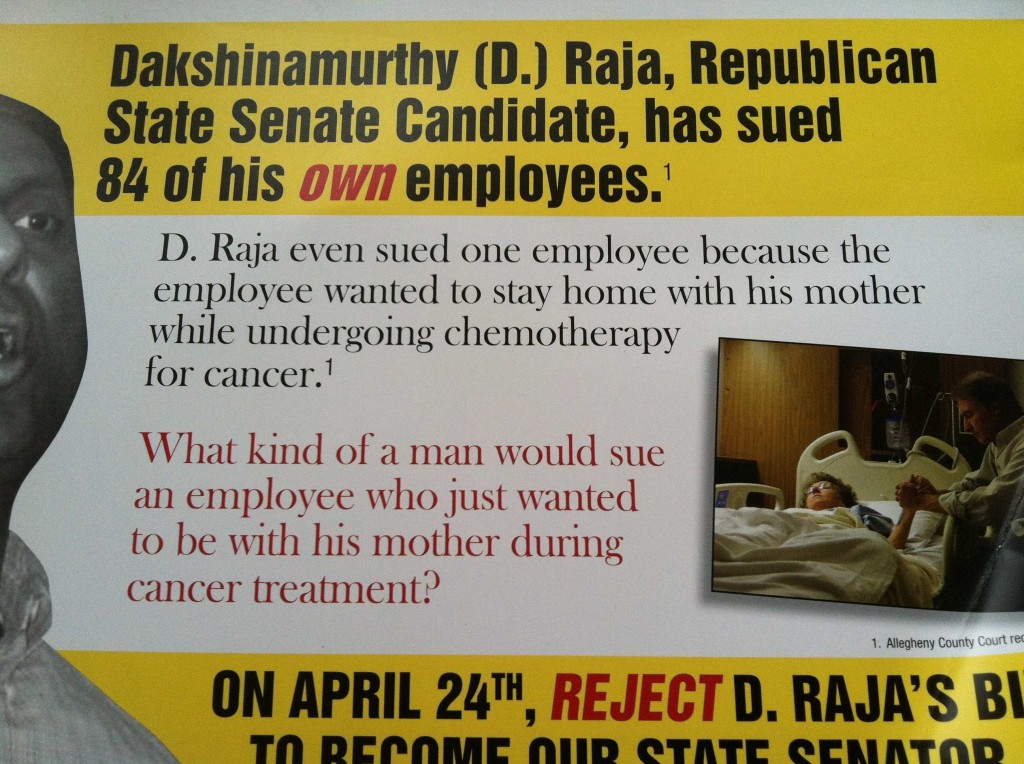 The Pittsburgh Post-Gazette Saturday withdrew its endorsement of Rep. Mark Mustio, citing his campaign’s use of “a racist appeal” in the form of a questionable mailer, and backed his opponent Raja instead. The apparently unprecedented move follows weeks of back-and-forth between the two rivals in the race to replace retiring Sen. John Pippy.

Mr. Mustio followed that up by crossing a line this week with an insidious mailing aimed at stirring up prejudices about Mr. Raja’s foreign birth. Even though Mr. Raja is known simply as Raja or D. Raja in his business dealings, personal life and politics, Mr. Mustio displayed prominently his opponent’s full given name –Dakshinamurthy — in a campaign flier.

We don’t buy Mr. Mustio’s explanation that he used the long name because it appears on lawsuits in which Mr. Raja was involved. The subtext is clear. In fact, Mr. Mustio makes it even clearer in his newest, so-called positive television ad in which the narrator intones, “Mark Mustio. He’s one of us, not a politician.”

This breach of decency, this appeal to voters’ base instincts, shows Mark Mustio to be a seriously flawed candidate who will stoop to racism to get elected. He’s not one of us.

The paper proceeded to endorse Raja, saying despite his “fuzzy” answers during his ed board interview, “this character issue trumps all. Besides, Mr. Raja is smart and would learn quickly in Harrisburg.”

The campaign has been very negative, with Raja blasting Mustio for his 2005 vote in favor of the legislative pay raise, and Mustio criticizing Raja’s business practices, including outsourcing.

But as Mustio escalated the racially-themed materials, Allegheny Republicans have been pressuring him to ease up. Rep. Tim Murphy, an early Mustio backer, publicly complimented Raja’s commitment to the community – a seeming rejection of the outsourcing charge.

Shortly after, Mustio publicly called for a ceasefire and unilaterally pulled his negative TV ads. He replaced with a positive spot (view here).

County GOP Chairman Jim Roddey agreed, and called on both campaigns to lay down their arms and stop the negative attacks by 3pm Friday.

He singled out Mustio’s ads in remarks to the Post-Gazette:

“I became very disappointed and very distressed at the way things deteriorated” on both sides, he said, noting that he had received comments about the ads from number of people. “However, the negative ads by Mark Mustio were slanted so that if you had any prejudice against Indian-Americans, it would be inflated.”

Roddey added that he does not believe Mustio is racist, but that the tone of the advertisements was “inappropriate” and not a good reflection for the Republican Party.

Raja’s campaign says it received Roddey’s ceasefire request too late Friday to alter its ads – one of which is positive, the other of which is a split positive/negative that defends against the outsourcing charge (view here). They will air at least through the weekend.

The third GOP candidate, Sue Means, is a homeschooling advocate. While Mustio and Raja have collectively spent over $1 million on the race, she lacks the financial resources to run ads. There is no Democrat on the ballot, but local activists are running a write-in campaign.