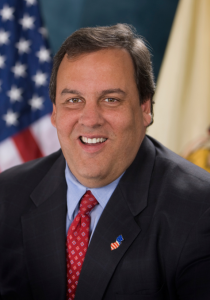 Pennsylvania voters have taken a shine to Chris Christie. The newly re-elected Governor of neighboring New Jersey was ahead in a GOP primary and a general election matchup in the Keystone state.

He lead former Secretary of State Hillary Clinton 48% to 44% in a head to head matchup according to the latest survey from Public Policy Polling.

It’s the first time any 2016 poll has shown someone other than Clinton winning Pa.

“Pennsylvania really shows how wide a disparity there is between the appeal of Chris Christie and any of the other Republican Presidential candidates,” wrote PPP President Dean Debnam. “Christie could win the state while the other hopefuls would do as bad or worse than Mitt Romney did there.”

Christie held Clinton to a 4 point lead among women while he leads men by 12 points.

He peeled away 22% of Democrats versus just 12% of Republicans for Clinton.

Both Christie and Clinton enjoyed leads in their respective parties’ primaries.

Christie took 26% of GOP voters, versus 16% for Cruz, 14% for Paul, 10% for Bush, 8% for Santorum, 6% for Florida Senator Marco Rubio, 5% for 2012 VP candidate Paul Ryan, and 3% each for Louisiana Governor Bobby Jindal and Wisconsin Governor Scott Walker. 9% were undecided or supported someone else.

Clinton, meanwhile, enjoyed a dominant lead in a hypothetical Democratic primary. She took 61% of the vote to 13% for Vice President Joe Biden, 11% for Massachusetts Senator Elizabeth Warren, 3% for New York Governor Andrew Cuomo, 2% for New Jersey Senator Cory Booker. 9% were undecided or supported someone else.

70% of Democratic women backed Clinton as did 52% of men. She enjoyed a 10 point advantage among voters 46 and older.

Note: Wednesday’s PPP survey announcement includes 3 polls: 1 of registered voters, one of Democrats, and one of Republicans. This article cites figures from all three.

PPP is a Democratic pollster, although its polls were found to be among the most accurate in the 2012 cycle.