PPP Poll: How Pennsylvanians Feel About Their Sports 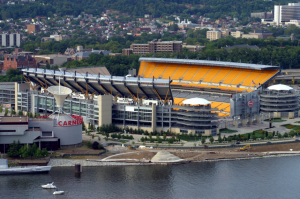 Time for a break from politics and a look at a much less controversial topic, sports. A new PPP poll also asked how Pennsylvanians feel about their major sports teams.

The Steelers remain more popular than their counterparts in Philadelphia. They hold a 40-28 lead over the Eagles. 31% either rejected both teams, do not watch football, favored another team or were not sure.

Steeler fans are also much more confident about their team than Eagles fans. Steeler Coach Mike Tomlin has a resounding 60% approval rating from fans of the Black and Gold. Meanwhile, a plurality of Eagles fans approve of the hiring of new coach Doug Pederson by a 48-38 margin. Philly fans are split over the idea of just never firing Andy Reid 37-39.

In terms of baseball, Pittsburgh again comes out on top, though the lead is within the margin of error for the poll. 36% of Pennsylvanians cheer on the Pirates with 33% rooting for the Phillies. Once again, 31% said they cheer for a different team or are not sure.

Pennsylvanians are more split, however, when it comes to college sports.

Penn State has a plurality of support with 34%. Other or not sure was the second largest category coming in at 23%. Pitt then took the next spot drawing the support of 13% of Pennsylvanians.

The final sports question from the poll asked if there was still hope for the Philadelphia 76ers. Only 25% had hope with 29% saying they had no hope. 46% were not sure on the matter.