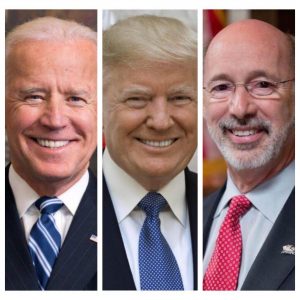 Another poll of battleground states shows Gov. Tom Wolf receiving high marks for his response to COVID-19 in comparison to President Donald Trump, while former Vice President Joe Biden also holds a lead in a head to head matchup over the president in the Keystone State.

According to a new Public Policy Polling survey, a Democratic-affiliated polling firm that commissioned this poll with Protect Our Care, a significant majority of Pennsylvanians back Wolf’s actions in response to COVID-19, while Trump’s ratings on the issue are under water.

When asked who Pennsylvanians trusted more to protect them from the coronavirus, 58% selected Wolf, while 35% said they trusted Trump more.

Trump also has work to do against Biden in Pennsylvania in this latest poll.

Biden leads Trump 51-44 in a poll of Pennsylvania voters, while 5% said that they are not sure. Biden’s lead is beyond the margin of error in this poll.

The PPP’s polling is very similar to several other polls released this week in Pennsylvania. A Fox News poll shows Biden leading Trump by 8 points, while polling from FOX43/Susquehanna Polling and Research shows Biden besting Trump by 6 points in the Keystone State.

The Real Clear Politics Average shows Biden besting Trump by 6.7 points in Pennsylvania. This PPP poll remains relatively consistent with the current RCP average, while Biden’s largest lead comes from a Fox News poll released yesterday showing the Scranton native with an 8 point lead in the state and the closest results from a Morning Call/Muhlenberg College poll in mid-February showing Biden and Trump deadlocked at 47-47.

Trump vs Biden by the Media Market

Trump bests Biden is several media markets in Pennsylvania, but his massive deficit in the Philadelphia media market puts him behind the former Vice President.

Another cause for concern for Trump is his job approval rating and a certain percentage of his supporters from 2016 siding with Biden in 2020.

While Trump grabs 1% of Clinton supporters in this latest poll, 8% of his voters from 2016 said that they are supporting Biden in the 2020 presidential election.

Mirroring his results by market against his matchup with Biden, most of the media markets in the state give Trump positive reviews on his handling of the coronavirus, but his large disapproval in the southeast puts Trump’s overall rating under water.