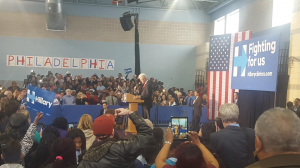 Yesterday the Clinton campaign held an organizing rally in Northwest Philadelphia with Bill Clinton in attendance.

Former Governor Ed Rendell, Philadelphia Mayor Jim Kenney and Philadelphia Councilwoman Marian Tasco made introductions for the former President. They reminded voters that they were able to deliver Pennsylvania to Hillary in the 2008 primary as well as making sure President Obama won the state in the general election over Republican Senator John McCain.

The 42nd President began by delivering a similar stump speech to Hillary’s at the Pennsylvania AFL-CIO Convention on Wednesday, building on the message that wages need to raised and more investment in manufacturing and infrastructure need to be made.

“Too many people look at that beautiful picture of America and they could not find themselves in the picture because eighty percent of the people are still living on their incomes the day of the crash and half the American people,after inflation, are living on what they were living on the last day I was president fifteen years ago,” said President Clinton.

Clinton also discussed investing in infrastructure, creating jobs through clean energy as well as building upon what President Obama has done with the Affordable Care Act. He then addressed education, using a line that Hillary has used before: “it shouldn’t matter what zip code you grew up in, whether you get a good education or not.”

This led to an attack on the Sanders campaign similar to ones used earlier this week. President Clinton claimed that his proposals for free tuition for public college will put too much of a burden on states which would have to come up with a third of the money WHILE the Republican Governors as well as the Republican-run Congress “won’t take them”. 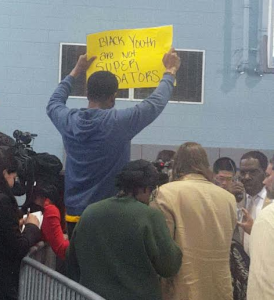 As President Clinton tried to move on to prison reform and Hillary’s efforts on the issue he was met with Black Lives Matter protesters. They were upset about the 1994 Crime Bill that he enacted while President. The bill cracked down on crime but also had a three strike rule that would put repeating non-violent criminals in prison for an extended period of time.

The protesters held signs stating that the “Clinton crime bill ruined our communities” and “black youth are not super predators”. Despite already admitting that the crime bill was taken too far and Hillary acknowledging regret for using those words, Clinton responded:

“I don’t know how you would characterize the gang leaders who got 13 year-old-kids hopped up on crack and sent them out on to the street to murder other African- American children. Maybe you thought they were good citizens…you are defending the people who kill the lives you say matter.”

The protesters continued to disrupt but President Clinton went on to advocate for his wife but also noted that voters should not be blaming Hillary for the the mistakes he made as president. He concluded by saying that everyone needs to be involved in this campaign in order to pull off a victory in this “unusual election”.