President Obama to Campaign in Pennsylvania 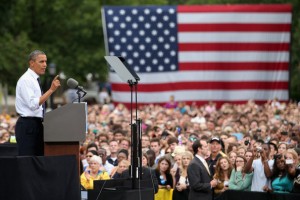 It appears the Commander-in-Chief will be making a campaign stop in Pennsylvania soon.

Last month, we mentioned a Politico report that stated the White House was planning on sending the President to Pennsylvania. Now, a new report confirms this.

“Obama is also expected to show up in several other states with competitive governor’s races: Connecticut, Pennsylvania, Florida, Illinois and, if the polls remain tight, Massachusetts,” according to Politico’s Edward-Isaac Dovere.

The Wolf campaign did not respond to PoliticsPA’s request for a comment.

The thrust of Politico’s report is that the President is confining his campaigning to blue states, specifically those with important Gubernatorial races as opposed to Senatorial ones.

“The White House is in the final stages of preparing a midterm campaign schedule for President Barack Obama through October that has only one color code: deep, deep blue,” is how Dovere put it.

While the President’s approval ratings are currently poor in Pennsylvania, Wolf’s advantage may be so strong that he doesn’t fear any negative effects.

This likelihood is increased by the fact that all the other states the President plans to visit are either deep blue or places where he has deep ties. Connecticut, Illinois, and Massachusetts are all very Democratic states (as are California and New York where the President will campaign for House races).

The only tossup gubernatorial race where the President will be campaigning in is Florida. There the Democratic nominee is Charlie Crist, a former Republican whose party switch was triggered by heavy criticism for hugging (figuratively and literally) the President. The only Senate race Pres. Obama will campaign in is Michigan, a state greatly benefitted by the auto rescue.