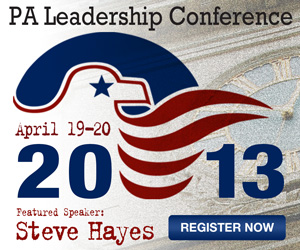 If you’ve ever purchased an extra ticket at the gun raffle because you just can’t be sure what the United Nations is up to, we’ve got a weekend for you.

Before there was such a thing as the Tea Party, Pa. movement conservatives organized the Pennsylvania Leadership Conference back in 1989. Here’s what, and who, to watch as they gather in Camp HIll this weekend for their annual meeting.

U.S. Reps. Scott Perry (R-York) and Keith Rothfus (R-Allegheny), each regular PLC attendees, will be at the Radisson Penn-Harris, too.

Pat Toomey. Since his effort to primary Sen. Arlen Specter in 2004, Toomey has been greeted as a hero at the PLC. But the Senator just finished a 2 week tour as a gun rights moderate, giving Democrats’ background check efforts a boost that Wednesday fell short of the finish line. Conservatives loudly protested his participation and there was even some “primary Toomey” chatter. Will his foray into bipartisanship tarnish his conservative cred? Will he get a chilly reception?

Bruce Castor and Tom Corbett. The Montgomery County Commissioner already has friends in the room who want to see him challenge Gov. Tom Corbett in 2014. Corbett is speaking at the dinner on Friday; Castor will be networking all weekend. What kind of reception each of them gets will tell a lot about where activists’ hearts lie.

2014 Hopefuls. As one conservative operative put it, “This is THE networking event for primary challengers in 2014. You have the donors, the activists, everyone who can help make it possible.” We’ll be watching to see who shows up this weekend to gauge and generate interest in an anti-establishment run for next year, from the top of the ballot to the bottom.

The full, formal schedule is below. Here are a few of the Friday social events happening on top of the official itinerary.

Citizens Alliance for Pa. Event
2pm
Location: TBD
Tickets: $100
Closed to the public and the press

This is the premiere anti-establishment conservative group in Pa. and the terror of moderate Republicans. They raised and spent $2M between 2010 and 2012. The event will feature CAP donors and supporters as well as a number of conservative luminaries: U.S. Rep. Scott Perry (R-York), 2012 U.S. Senate candidate Tom Smith, Castor, and some prospective challengers like Rob Ciervo (vs. state Sen. McIlhinney) and Art Halvorson (vs. Rep. Bill Shuster).

Liberty on the Rocks Mixer
After dinner
Location: Arooga’s (the nearby sports bar)

PoliticsPA is seeking details and confirmation of this event from Liberty on the Rocks.

Screening of ‘FrackNation’
Hosted by Heritage Action
After dinner
Location: Governors Room A

Here is the full schedule including workshops:

PLC has advertised on PoliticsPA.

One panel will feature PoliticsPA contributing writer Connor Kurtz who is a member of the Daniel Boone School Board in Berks County.