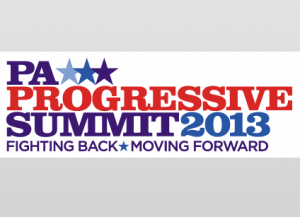 Ever choose to skip an occupy rally because the hemp-paper fliers didn’t have a union bug? Have we got a weekend for you.

From the far left around Pa., progressives will gather at the Harrisburg Hilton this weekend for their annual summit. It will be a key opportunity for prospective candidates to court the activist base of Democratic party.

Prospective candidates and their staffs will be working rooms both in formal seminars and in social events afterward. Look first and foremost for hopefuls for Guv, Lt. Guv, and PA-13.

The event is put on by Keystone Progress and the full agenda is here. The keynote speaker is David Cobb, the spokesperson for Move to Amend (MTA), a group that seeks to curb the influence of corporations in government.

Here are some agenda highlights:

Drinks and appetizers with Jim Dean from Democracy for America and David Cobb.

Fired Up! Welcome party hosted by Senator Daylin Leach
7:30 PM
The Fire House Restaurant
(Must be registered for the Summit to attend)

Leach is a progressive hero in Pa. and has good reason to keep up his ties. He has floated his name for LG and making moves to position himself as Allyson Schwartz’s successor should she leave her congressional seat to run for Governor.

Some of the seminars stand out to politicos and 2014 campaign watchers.

Women on Top: Lessons from (and for) the Next Generation of Pennsylvania Progressive Women Leaders

What’s Next for Health Care Reform

Dr. Val Arkoosh is a sleeper pick for PA-13, and a panelist here.

Blood From a Stone: Corbett’s 2013 Budget

Montco Commissioner Josh Shapiro is a potential candidate for everything, and will sit on this panel with Sen. Vincent Hughes and others.

The Fourth Estate: Cracking the Code on the Role of Journalism in Government and Politics

This panel features state Rep. Brandon Neumann (D-Washington), who is looking at a bid for Lt. Gov.

Of all the issues where progressives think they have momentum, this one takes the cake. The panel features Allentown Mayor and prospective Guv hopeful Ed Pawlowski as well as Shira Goodman of CeaseFirePA and state Rep. Madeleine Dean (D-Montco).

This is John Hanger’s wheelhouse. The former environmental activist and former Secretary of the Dep’t of Environmental Protection is running for Governor and serving on this panel.

Given progressives’ affinity for immigration reform, this choice of after party makes sense.