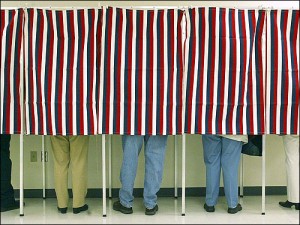 Good morning politicos, it’s here. The messaging is done, and now it’s a question of whether campaigns can get their supporters out the door and to the polls.

PoliticsPA will be covering the election all day, and the vehicles for our coverage will be these open threads, arranged by race:

Campaigns Brace for Snowstorm: “When did Steve Welch get God’s endorsement?” quipped on GOP operative. After millions of dollars and months of hard campaigning, several high-profile races could come down to the weather. Update: about 6 inches of snow fell in the populated areas of western PA, meaning some campaigns avoided a worst case scenario.

Corbett Stars In Mailer, Robocall for Pa. GOP Slate: The Pa. Republican Party played their biggest card in the final days before the election: Tom Corbett. The Guv starred in a mail piece and robocall on behalf of the party’s endorsed candidates. Meanwhile, Dick Morris sent out another appeal for Tom Smith.

Murphy Whacks Feinberg in Mailers: Rep. Tim Murphy and his campaign are confident of a win on Tuesday, but that doesn’t mean they’re giving challenger Evan Feinberg a free pass. In mailers and radio ads, they accuse Feinberg’s stridently conservative views of jeopardizing local interests.

Election Day Is A Test of Voter ID Law: Tuesday’s primary will serve as a dry-run for the most recent voter ID law that was enacted a little more than a month ago.

Shenanigans In HD-92: Charges of fraud and ethics violations fly in the GOP state House race that includes the son of a Harrisburg power-broker, the nephew of a state Senator and three others. Mike Regan blames Rocco Pugliese, the father of one of his opponents, for a mail piece from a newly formed PAC.

Romney Makes Final Pa. Primary Campaign Swing: With less than 24 hours remaining until Pennsylvania’s ballot booths open, Mitt Romney’s campaign made sure to hit Pennsylvania’s two major metropolises in a last-minute effort to sway voters. He is seeking to avoid a protest vote among Pa. voters.

Barletta Smiles on Romney: Rick Santorum hasn’t endorsed Mitt Romney yet, but one of his top PA backers has. The Romney camp rolled out the support of Rep. Lou Barletta Monday afternoon.

Kelly, Meehan and Thompson Back Romney: Mitt Romney appears to be taking out insurance against possible protest/sympathy votes against him on Tuesday. The GOP frontrunner rolled out three more PA endorsements after making a swing through the state: U.S. Reps. Mike Kelly, Pat Meehan and G.T. Thompson.

Lots of Republican lawmakers are facing primaries today, as summarized by the PA Independent. And ACB27 takes a look at CAP, a conservative group backing many of the challengers.

WHYY Newsworks has a look at the Philly-area special state house elections.

HD-16: The Beaver County Times previews the race between Jeremy Angus and Kathy Coder for the Republican nomination.

HD-92: There are several nasty mailers going to voters who will vote on the Republican nomination for the seat. The candidates are Scott Derr, Anthony Pugliese, William Sieg, Mike Regan and Dan Johnson.

HD-169: What role is Local 98 playing in this primary and special election? PhillyNow says the mailers in the race are particularly negative.

Southwest:
Johnstown Tribune Democrat: Pa lawmakers to live a week on $35 worth of food
Beaver County Times: All Eyes on Altmire-Critz Race