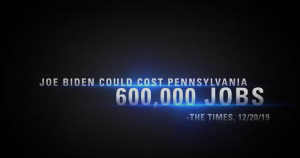 A pro-Trump PAC is hitting former Vice President Joe Biden on energy policies in a new ad campaign in Pennsylvania.

The 30 second spot, “No More” specifically targets Biden on comments made in a previous debate about energy policies and claims that a Biden administration “could cost Pennsylvania 600,000 jobs.”

“Would there be any place on fossil fuels, including coal and fracking, in the Biden administration?,” CNN’s Dana Bash asks Biden in the ad.

“No, we would work it out, we would make sure it’s eliminated,” Biden responds.

The ad goes on to include a clip of Bash asking what place would fracking have in Biden’s administration and Biden follows with a similar answer.

The ad ends with a narrator saying that “after 47 years in Washington Joe Biden just doesn’t make sense for Pennsylvania jobs.”

The Biden campaign fired back in a comment hitting Trump on his response to COVID-19.

“No amount of third party advertising is going to make Pennsylvanians forget that our ‘wartime President’ Donald Trump failed them when they were facing a crisis. 5,953 Pennsylvanians have died due to a crisis made worse by Donald Trump’s failure to act quickly and effectively,” Biden spokesperson Emma Riley said. “Pennsylvanians know what’s at stake in this election and on November 3rd, they will remember that Joe Biden has never forgotten them.”

The DNC also added in a comment that Trump’s economy has “exacerbated the worst jobs crisis since the Great Depression,” and criticized Trump’s comments about the most recent jobs report.

There isn’t an abundance of recent polling of Trump’s job performance in regards to energy, but polling earlier in the year showed mixed results for fracking in Pennsylvania.

A spokesperson from America First Action told PoliticsPA that the ads launched in the state on June 4 and will continue until July 3.

While America First Action is also on the airwaves in Michigan and Wisconsin for this current ad buy, the Pennsylvania ad buy is the largest of the bunch and the only state where fracking is mentioned in an ad.

$3.5 million is pledged from America First Action for the Pennsylvania ad buy, while the Wisconsin ad buy is for $2.25 million, and $1.75 million is reserved for Michigan.

The Pennsylvania ads are airing in the following markets: Pittsburgh, Harrisburg, Johnstown, Erie and Wilkes-Barre.

The most recent polling show a tight race between the two in the Keystone State, although Biden currently has a narrow edge.