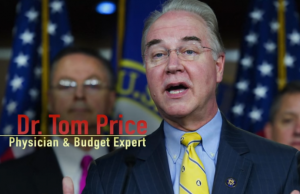 A Pro-Trump super PAC called 45Committee is spending at least $65,000 on ads pressuring Senator Bob Casey to support the President’s nominee for Secretary of Health and Human Services.

Casey has already announced he intends to vote against former Congressman Dr. Tom Price for the post.

A generic version of the Price ad can be viewed below. The Pennsylvania version shows Casey’s picture and direct office number.

“No surprise that shady, dark money groups funded by corporate interests are advocating for an HHS nominee who would end guarantee benefit for Medicare and cut nursing home funding for seniors,” said Casey spokesperson Jacklin Rhoads.

FCC reports show that the group’s aired ads in all of the major markets of Pennsylvania with the exception of Philadelphia.  They aired most ads during local news, Jeopardy and Wheel of Fortune broadcasts.  WGAL in the Harrisburg market saw the biggest spend at $28,000, followed by WJET Erie with $16,000 and WPXI Pittsburgh with $12,000.

The FCC reports only provide information on broadcast ad buys, and the group also spent money on cable ads. As the Scranton Times-Tribune notes, the effort is part of a $1 million nationwide effort on the part of the group.

PoliticsPA reached out to the group for additional information, such as how much money they are spending on the ads in Pennsylvania, and if they are planning to run more such ads in the future.