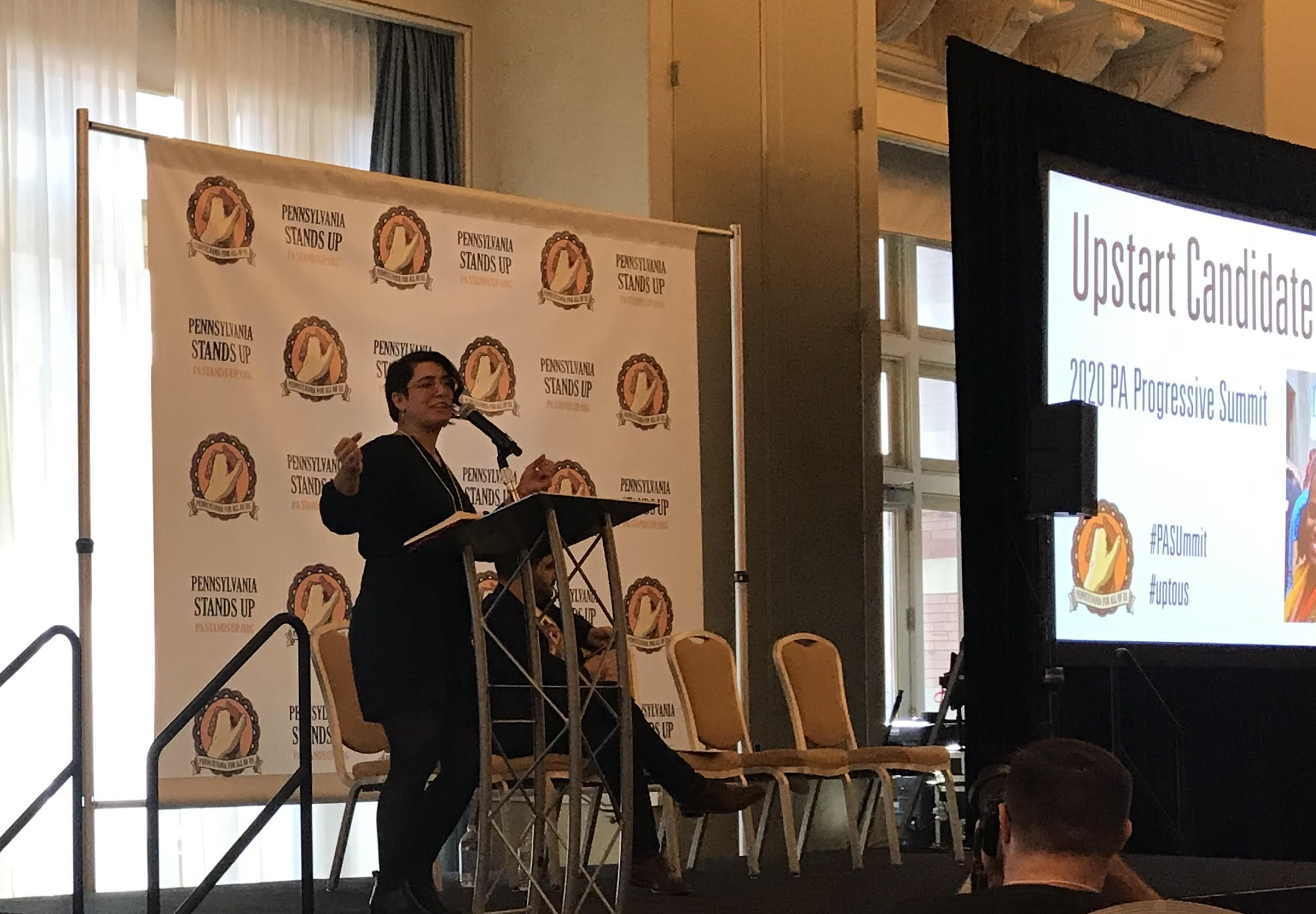 PHILADELPHIA- The 2018 midterms were kind to the Pennsylvania Democratic Party. After a disappointing 2016 election for the state party with Donald Trump and Sen. Pat Toomey winning the state, Gov. Tom Wolf and Sen. Bob Casey won by double digits, Democrats evened up the state’s Congressional delegation, and even made gains into the GOP majorities in the state House and Senate.

The roadmap to victory for Democrats across the commonwealth in the previous midterm was not shared by every candidate, with some embracing policies championed by the most left wing of the party, while other candidates won with left of center messages.

This past weekend, hundreds of liberals rallied around drumming up support for the most progressive causes at the 2020 Progressive Summit in Philadelphia.

State Rep. Sara Innamorato (D-Allegheny), who bested longtime state Rep. Dom Costa (D-Allegheny) in the 2018 Democratic primary by challenging him from the left, told the annual gathering of Pennsylvania progressives that she was successful because her campaign presented a “bold vision” and encouraged others to embrace these positions.

“We ran a grassroots campaign, we knocked tens of thousands of doors, we were told we couldn’t run on a bold vision, yet we did,” Innamorato said. “We talked about healthcare and housing as a human right, we talked about clean air and clean water, we talked about making sure that we get money out of politics and in order to achieve any of that, we have to change who represents us.”

During the end of Innamorato’s speech, she led a pledge for 15 candidates seeking office in the state legislature this year to promote criminal justice reform, support a green new deal, right to join a union for everyone, and more. 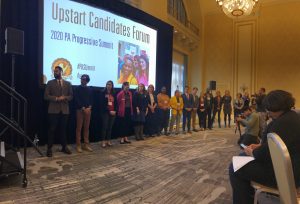 Of the 15 candidates who were each given one minute to speak to the conference, seven of them are launching primary bids against incumbent Democrats. The primary challengers for the state House included Emily Kinkead, who is attempting to unseat state Rep. Adam Ravenstahl (D-Allegheny) in the 20th District, Ginny Kerslake, who is seeking the seat held by state Rep. Kristine Howard (D-Chester) in the 167th District, Rick Krajewski, who is running to unseat state Rep. James Roebuck (D-Philadelphia) in the 188th District, Enid Santiago, who is challenging state Rep. Peter Schweyer (D-Lehigh) in the 22nd District, and Andre Del Valle, who is one of several Democrats running against state Rep. Mary Isaacson (D-Philadelphia) in the 175th District. The two challengers on the state Senate side present were Amanda Cappelletti, who was endorsed by Gov. Tom Wolf against state Sen. Daylin Leach (D-Montgomery) in the 17th District, and Nikil Saval, who is running against state Sen. Larry Farnese (D-Philadelphia) for the 1st District.

The amount of primary challengers present at the meeting, plus the work of various panels and breakout sessions including “prison gerrymandering,” “Looking for Centrism in All the Wrong Place,” and “Messaging, Saving, & Surveying Our Way to Medicare For All” provide a glimpse into the current schism within the Democratic Party.

The differences were most on display during the lunch break when three surrogates for presidential candidates addressed the room.

While surrogates sounded the alarm on what a second term of a Trump presidency would mean for the country, it couldn’t have been more clear that those in the room were eager to support Sen. Bernie Sanders candidacy over former Vice President Joe Biden.

“I think we all know that we are in a real crucible moment in our politics,” said Zephyr Teachout, a Fordham University Law professor and former New York gubernatorial candidate, who was speaking on behalf of Sanders. 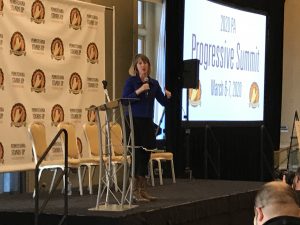 “The way to defeat him [Trump] is with a politics that brings a strong, clear, moral vision of healthcare, the environment, racial justice, trade, and the role of money in politics,” Teachout said. “On all of these issues, Bernie Sanders and his movement, has always been about us, not just him, presents a clear contrast from Donald Trump will allow us to win Pennsylvania and will support those down ballot candidates.”

During Teachout’s 15 minute address, which included thunderous applause from the crowd on multiple occasions, she often delivered direct shots at Biden, who has emerged as the frontrunner after Super Tuesday, saying that the former VP is not the “safe pick” for the Democratic Party and said Sanders vision provided a clear difference for voters in November against Trump.

Terry Gillen, who served as an aide to former Gov. Ed Rendell, made the case for Biden’s campaign, claiming that he was the candidate most capable of implementing policy to advance the Democratic Party’s agenda, while adding that he can have a positive down ballot effect for Democrats as well. 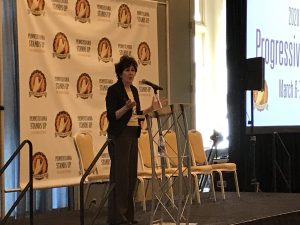 Gillen pointed to the recent victories on Super Tuesday and the success the Biden campaign had in diverse areas and in the suburbs as proof he could drum up enough support to defeat Trump in the general election.

“Last week, I think we started to see that,” Gillen said. “In suburban counties outside of cities like Charlotte, North Carolina and Richmond, Virginia, there was record turnout for Joe Biden.”

“Joe can win places like that and he can win in Delaware County and Pennsylvania,” Gillen added.

When Gillen was asked during the Q&A portion of the event about how Biden could “justify not supporting a single payer system,” she responded by saying that it’s his belief that the “fastest way to universal healthcare coverage is to build on Obamacare,” and claimed that we live in a “very conservative country with a very conservative congress” and pointed to the Affordable Care Act passing by a razor thin margin during Obama’s first term with Democratic majorities.

The presidential discussion at this progressive gathering certainly has evolved since last year’s meeting in Pittsburgh. At the time of the crowded Democratic field in February 2019, Sen. Kamala Harris won the straw poll with 26 votes, followed by Sanders with 23 votes and Warren with 21 votes.

While the weekend gathering presented a united front of progressives seemingly all on board with a Sanders presidency, polling and endorsements provide a different narrative in the keystone state.

A poll from Franklin and Marshall College released in late January showed Biden leading the Democratic pack with 22%, while Sanders was in second place with 15%, followed by Sen. Elizabeth Warren with 14%, and former New York City Mayor Michael Bloomberg in fourth place with 7%. However, the Election Research Center at the University of Wisconsin-Madison released a poll two weeks ago that showed Sanders leading the way in the Pennsylvania Democratic primary with 25%, followed by Biden in second place with 20%, and Bloomberg in third place with 19%.

A Quinnipiac University poll released 18 days ago showed all of the Democratic presidential frontrunners leading Trump in the state with Biden holding the largest lead of 8 points and Sen. Bernie Sanders leading Trump by 4 points. However, a Morning Call/Muhlenberg College poll released within the last two weeks showed Sanders with the best odds as the only Democrat defeating Trump head to head in the state by 3 points, while Biden was tied with Trump, although both results were within the margin of error.

In terms of endorsements from Pennsylvania elected officials, Biden holds a clear advantage over Sanders.

Six of the state’s nine member Democratic Congressional delegation endorsed Biden’s bid for the White House, while the remaining three have not endorsed a candidate yet. Sanders highest profile endorsements in the state include Innamorato, state Rep. Summer Lee (D-Allegheny), and Philadelphia City Councilmember Helen Gym.