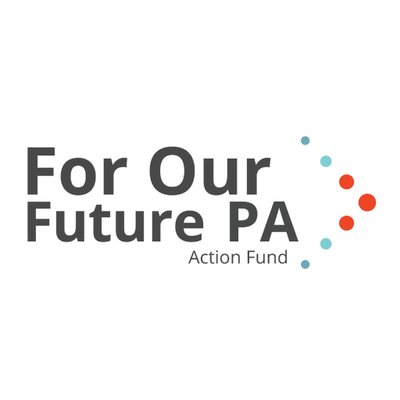 The DNC and a large Democratic backed super PAC announced in February plans of making large investments in hopes of putting PA back in the win column for 2020. Now, we have another super PAC attempting to make waves in the state.

For Our Future, the nation’s “largest super PAC devoted to grassroots Democratic turnout,” announced it is planning to spend $80-$90 million focusing on seven specific states that includes Pennsylvania.

The super PAC, started in 2016, aims at using on the ground staffers and grassroots volunteers meeting voters at their home, coupled with using digital ads, as opposed to TV ads. The super PAC, largely funded by labor unions and liberal billionaire Tom Steyer, see Pennsylvania as a must win state in one terming President Trump.

McBride, who has been apart of the Pennsylvania effort with the group since its inception in 2016, talked about working off of the momentum from the previous election that saw gains in the state House, Senate, Congress and double digit victories from incumbents Gov. Tom Wolf and Sen. Bob Casey.

She said the super PAC has knocked on doors in all parts of the state, and will continue to do so leading into the 2020 election, but sees the Philadelphia suburbs as the region with the chance to make the greatest impact.

“We feel like there’s a great opportunity in gains in Southeastern Pennsylvania, so in the collar counties, in Chester, Delco, Montgomery and Bucks,” McBride said.

She credited the success the PAC had in 2018 for listening to voters concerns across the state and believes that despite the different makeup of the electorate in various corners of the state, she thinks ultimately all of the voters that are going to vote Democrat in 2020 have the same concerns.

“They wanted a job that pays a living wage, they wanted adequate access to healthcare, they care about education,” McBride said. “Our messaging may look a little different because again in the Northeast and the Southwest we’re talking about people who have really voted for change in a sense and wanted the promise that Trump would bring back steel or coal industries… and it just has not happened.”

McBride thinks voters who traditionally voted Democrat, but pledged their vote to President Donald Trump over Sec. Hillary Clinton in 2016 have a real chance at coming back to the party in 2020, specifically citing Lackawanna, Luzerne, and Monroe Counties. Clinton narrowly won Lackawanna and Monroe Counties in 2016, while President Donald Trump flipped Luzerne County by besting Clinton by 20 points.

The super PAC also focuses on races in the state legislature, in hopes of flipping the state House and Senate in 2020.

The Pennsylvania Republican Party believes the effort by the PAC will not make an impact on the election and touted their own efforts already underway for the 2020 campaign.

“While costal elitist like Tom Steyer have to spend millions of dollars earned from their capitalist pursuits to register voters, Republicans have seen a growing sentiment from voters indicating they are fed-up with the extreme march to socialism demonstrated by the Democrats, which has organically helped us flip several counties to majority Republican,” said PAGOP Executive Director Mike Stoll. “On top of that, the Republican Party of Pennsylvania is already building out a paid field staff and working in coordination with our national partners to invest significant time and resources in voter registration and grassroots advocacy efforts that will mobilize volunteers across the state in support of the Republican agenda and Republican candidates.”