Protesters Speak Out Against UPMC 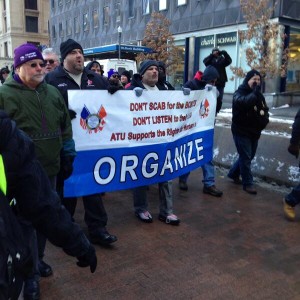 Workers, labor activists, politicians and concerned citizens took to the streets in downtown Pittsburgh yesterday to protest the treatment of workers employed by the health care giant UPMC.

The ongoing battle that has pitted UPMC, one of the largest employers in the city, against its blue collar employees seems to have reached a boiling point, as demonstrators blocked traffic, held signs, and chanted “No More Poverty Jobs,” and “Good Jobs, Healthy Pittsburgh.”

Chaney Lewis, a father of two from Wilkinsburg neighborhood of Pittsburgh, came out for the demonstrations. His partner also works at UPMC.

“We’ve struggled in silence for too long,” he said. “Our families, our patients, our city need UPMC to pay better wages. We want more for our boys, but no matter how many hours we put in at UPMC, it’s not enough.  UPMC can do more to improve jobs, and it must.”

Many employees have claimed that their UPMC paychecks are not enough to cover the basic day-to-day costs of living in Pittsburgh.

State Rep. Erin Molchany (D-Allegheny) was also in attendance and spoke about the plight of the UPMC wage workers.

“UPMC workers deserve to earn family-sustaining wages and have access to the highquality [sic] healthcare delivered in the hospitals they work in everyday,” said state Rep. Erin Molchany. “Pittsburgh is great because we look out for our neighbors and work together.  Our region’s future depends on UPMC working with us to improve jobs and make their world-class healthcare accessible to everyone.”

Both Lewis’ and Molchany’s statements allude to the important and vital role that the healthcare provider plays in the city’s economy.

The problem began last October when the National Labor Relations Board charged UPMC with actively punishing employees who were in talks with union representatives. Four employees were allegedly fired because of the incident.

The union in questions was the Service Employees International Union’s Healthcare Pennsylvania faction.

Since the initial allegations, workers have rallied together to put pressure on the healthcare provider to increase wages and address harsh working conditions.

UPMC is also dealing with an attack on its nonprofit status in the city, which, as it stands, allows the company to be exempt from certain property taxes.