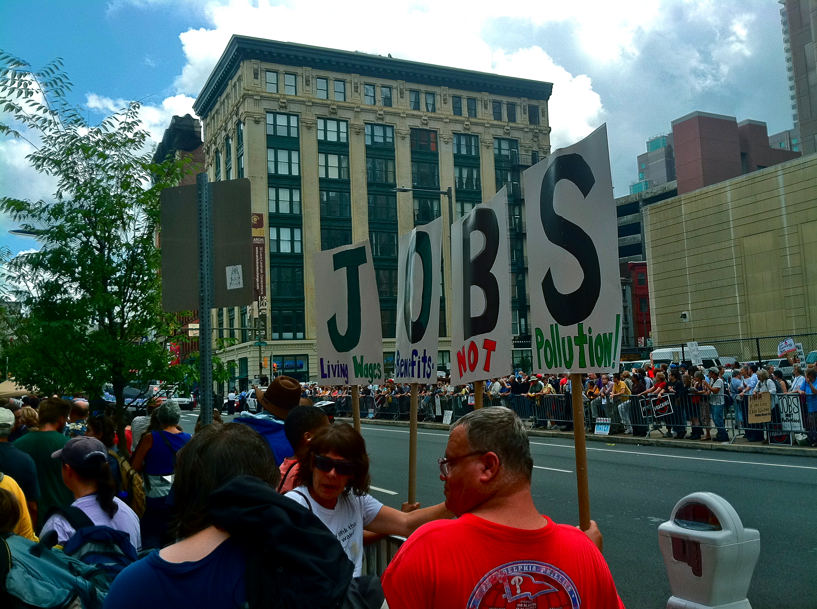 While energy executives and legislators held discussion panels and information sessions at the Shale Gas Insight Conference inside, the scene outside the Pennsylvania Convention Center Wednesday was far from business-like. Hundreds of protesters gathered to voice their concerns over the potential environmental repercussions of hydraulic fracturing, aka “fracking.”

Protesters held signs with slogans such as “Frack Causes Earthquakes” and “Frack Makes Children Sick,” and passed out fliers yesterday claiming, among other things, that residents near drill sites can actually light their drinking water on fire from the gas that has contaminated it.

As one speaker proclaimed, “There are hundreds of reasons not to frack, any of which would alone be a sufficient reason not to do it.”

One of the speakers, Craig Sautner, has had arguably too much experience with the potential side effects of fracking. At his family’s home in Dimock, PA, he said gas from a nearby well migrated into the drinking water. His water supply turned brown, yet according to Sautner, “we were the lucky ones because we could see it in the water and stop using it. Other people’s water is contaminated and they can’t even tell.”

Angry at the gas companies, Saunter took to the stage to share his experiences, and held a sign condemning the gas company who drilled the wells near his home.

Many of those in attendance at the conference gathered at the windows overlooking the protest, and Rep. Mark Critz had much to say about the backlash.

“Its a public relations issue. This industry really needs to be forward. Be the champion. Be the one out there saying ‘This is what we’re doing, this is how it works.’ And make sure that people locally are aware of what’s going on.”

But in the eyes of Mel Packer, a protester with MarcellusProtest.org, information is not enough. He, along with the rest of the crowd, believe that fracking won’t be a viable option until there is a way for it to be conducted without harming the environment for future generations.