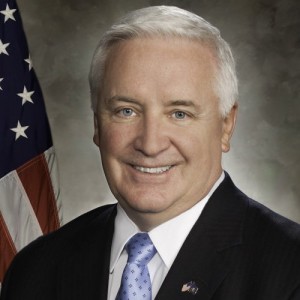 The latest survey from Public Policy Polling shows that Tom Corbett, were he currently up for re-election, would have reason to sweat. Against a generic Democratic opponent, he trails 45 percent to 39. Fortunately for the Guv, he still has 50 percent of his term to work his way out of the hot seat.

But his ratings are slipping. Only 32 percent of voters approve of his work thus far (47 percent among his own party), and 49 percent disapprove.

The pollster notes that Corbett’s ratings are even trailing behind those of fellow GOP govs. including Michigan’s Rick Snyder, Ohio’s John Kasich, and Wisconsin’s Scott Walker, who have garnered additional approval points according to recent polls.

Approval for Voter ID is also on the downslide. Although a majority of Pennsylvanians still support the law (58 percent to 37) that is down 8 points from a 66 percent to 32 approval rating in a Quinnipiac poll six weeks ago.

Republicans are almost unanimous in their support, while Independents favor it by a smaller-than-average margin of 55 percent in favor and 41 against. It meets with favor from 35 percent of Democrats.

And even with all of the bad news coming out of Happy Valley, the poll also found that there is still a fair amount of support for Penn State’s late head coach Joe Paterno – although his image has taken a hit.

In November, Paterno’s approval rating stood at 51 percent favorable and 28 percent unfavorable. Those numbers now stand at 45 percent to 37. More people also opposed removing his statue from the campus by a 13-point margin, 48 percent to 35. The removal happened in the middle of the poll’s Saturday-Monday field period.

The University itself has also taken a hit, down from 61 percent favorability to 50. But Jerry Sandusky fared worst of all, with a 94 percent of people having a negative view of him to only 2 percent favorable – the worst poll numbers PPP has found for a public figure ever.

People answering the survey identified as 47 percent Democratic, 43 percent Republican and 10 percent other. According to the Department of State’s numbers from June, of PA’s 8,255,249 registered voters, 50.20 percent are Democrats and 37.25 percent are Republicans.