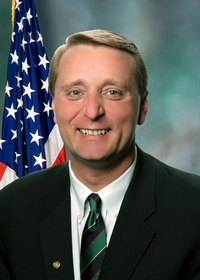 Pyle, who has served in the state legislature since 2005, cited health issues as the reason he is retiring at the close of business today.

“It has been a privilege to serve the residents of the 60th Legislative District for more than 16 years but it’s time to now put my health first,” Pyle said. “I will miss advocating for my constituents and working to improve the lives of those living and working in our area. As a young boy growing up in Armstrong County, I would never have dreamed that I would be elected to represent my community in Harrisburg. What an honor it has been.”

Pyle was diagnosed with kidney cancer in February 2005 and it returned in his chest in October 2017. He suffered a stroke in 2020, and he continues his rehabilitation and cancer treatment, according to a release announcing his retirement.

“I was fortunate enough to get a firsthand look at how Rep. Pyle approached his work early in my career because Jeff and I shared an office space here in the Capitol,” House Speaker Bryan Cutler (R-Lancaster) said. “I learned exactly what it takes to be a successful representative.”

“Keeping your door open to constituents and ensuring their voices are heard. Even in recent years, when Rep. Pyle faced his own challenges, he never wavered in his relentless efforts to improve the lives of those he represents, and he set an example for each of us to try and follow,” Cutler continued. “He was a great member and best friend.”

Pyle currently serves as the Chair of the House Liquor Control Committee.

During previous terms, Pyle chaired the House Gaming Oversight Committee, while also leading the Second Amendment Caucus and Coal Caucus each for 10 years. He is also the only Pennsylvania legislator on record for 16 consecutive years to receive an A+ rating from the National Rifle Association, according to a release.

Pyle was unopposed in his most recent reelection bid to secure a ninth term in the state House to represent the 60th District, which includes parts Armstrong, Butler, and Indiana counties.