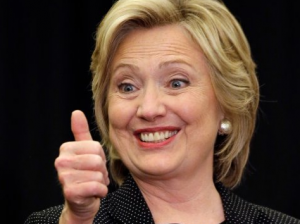 The debate may not have moved the numbers after all.

At least that’s the finding of the latest Quinnipiac Poll, which shows Hillary Clinton with 48% and Donald Trump at 43% with likely voters.

That’s identical to Quinnipiac’s results from a month ago.

While the debate didn’t move the numbers, respondents overwhelmingly felt the Democratic nominee won the contest.

57% believe Clinton prevailed in the debate while 21% say Trump did. 11% considered it a tie. Every demographic group except for Republicans felt Clinton won the debate.

Speaking of demographics, there are once again serious gender and educational gaps. Women support Clinton/Kaine 54% to 37% while men back Trump/Pence 50% to 41%.

Additionally, white college grads go with Clinton/Kaine 50% to 42% against white non-college grads who support Trump/Pence 57% to 36%.

The party breakdown was mostly as expected with Clinton leading Democrats (85/8), Trump winning Republicans (88/9) and the former Secretary of State edging ahead with independents (43/39).

The good news for Clinton is that she has retained her lead, although it is surprising to not see her get a debate boost. Other national and state polls have shown her numbers improving since the September 26th contest.

It is possible, though, that the debate didn’t affect the already emerging trend lines in some swing states.

For instance, in September Quinnipiac had Clinton ahead by a few points in PA and North Carolina. Meanwhile, Florida was trending towards Clinton yet Ohio was trending away. Those trends are exacerbated in this survey that has the Democrat up five in Florida but down five in Ohio.

If Pennsylvania stays stable in an unstable race that will be good news for Hillary Clinton.