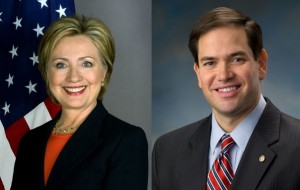 The principal swing states, Florida, Ohio, and Pennsylvania, are necessary wins for presidential candidates, as no candidate has won the White House since 1960 without taking at least two of the three.

Therefore, Quinnipiac polled all of them to determine each party’s front-runner in the presidential election.

In Pennsylvania, as in the rest of the nation, one primary is up in the air while the other is far from competitive.

The race remains wide open with 13% responding that they still don’t know who they’ll support.

“With so many Republican candidates, there is no clear leader in these key swing states in the race for the 2016 presidential nomination,” reported Peter A. Brown, assistant director of the Quinnipiac Poll.

When broken down by demographics, there were large gender gaps for several of the candidates but not for Rubio, who received 12% each from men and women.

Meanwhile, candidates like Jeb Bush and Ben Carson received much more support from women than men (16/4 and 13/7 splits respectively).

On the other hand, Rand Paul and Scott Walker did much better among male respondents than females (17/4 and 12/6 splits respectively).

“The favorability rating and combined first and second choice numbers show that in this crowded pack of candidates Sen. Rubio is making strong inroads with Republican voters and probably is the candidate who should be most heartened by the results of this poll,” said Brown.

The Democrat contest is a completely different story.

“The race for the Democratic nomination could not be more different. Secretary Clinton is far, far ahead and the criticisms of her and questions about her email and family foundation seem to be having no impact at all on her Democratic supporters,” reported Brown.

“She remains the apple of the Democrats’ eyes and at least at this point has little to worry about from her primary challengers,” he concluded.

Although Vice President Biden is a Pennsylvania native, this proved to be of little help, as Clinton still dominates the Keystone State.

Clinton is favored by 53% of Pennsylvania’s Democrats compared to Biden’s 15%.

This is not very different compared to the April Quinnipiac Poll release, where Clinton still commanded a 48% lead.

Also, considering that Biden has yet to officially declare his intentions (it’s widely believed he won’t run), the only potential candidate that even registers is Vermont Sen. Bernie Sanders at 10%.

Former Virginia Sen. Jim Webb (2%) and former Maryland Gov. Martin O’Malley (1%) are rounding errors, but at least they finished ahead of ex-Rhode Island Governor and Senator Lincoln Chafee, who no one selected.

The Quinnipiac Poll was conducted from June 4th to June 15th. 970 Pennsylvania registered voters were interviewed live through land lines and cell phones. The margin of error is plus or minus 3.2%.