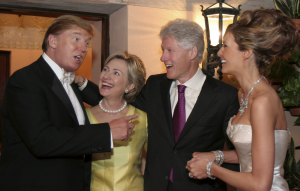 At least according to the latest Quinnipiac Poll, which shows Hillary Clinton and Donald Trump leading their respective party primaries.

Those without a college degree are evenly split at 46%.

Trump wins among those without a college degree, moderates, somewhat conservatives, men and women.

Cruz is ahead with the tea party, evangelicals, and very conservatives.

Kasich, meanwhile, has the lead among those with a college degree.

Nevertheless, Kasich also outperforms Bernie by a 46% to 40%.

Given the above results, it shouldn’t be a surprise to see that Kasich has the best favorable/unfavorable ratings although that’s mostly because many still don’t know him.

His split is 49/17 with a third of respondents not having heard enough about him.

Sanders is second best with a 49/37 showing while Cruz and Clinton are each under water with 32/50 and 35/59 respectively.

Trump fares worst with just 32% of Pennsylvanians having a favorable opinion of him while 60% view him unfavorably.