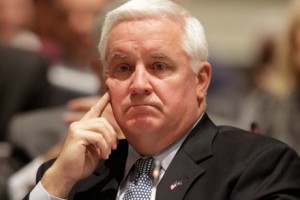 Corbett’s numbers are on the move, and not in his favor.

Pennsylvania’s voters now have a slightly more unfavorable view of how he is doing as Governor, with approval at 36 percent and disapproval at 47 percent in the latest Quinnipiac poll. It continues a downward trend since his peak in September, where he enjoyed 50 to 32 approval in a poll conducted immediately after his skillful response to PA’s devastating floods.

It’s the first time Q-Pac has shown Corbett in the negative. Their March poll showed him with net positive approval, albeit by a narrow margin (41 to 38).

Now, he’s trailing among every demographic group the pollster tested (women disapprove 51 to 32; men 43 to 40; all income levels and all age groups). Independents disapprove 45 to 35 percent.

Likewise, Corbett fares poorly in every region except central (approves 41 to 39 percent) and the northwest (split at 45 percent).

A number of polls have shown the Guv in negative territory, most recently Franklin & Marshall. Their poll last week found that voters disapprove his performance 39 to 32 percent.

But there’s good new for the Guv, too – provided the economy continues to improve. He currently gets the lion’s share of credit.

Of the 11 percent of PA voters who believe that Pennsylvania’s economy has gotten better since Corbett took office, 66 percent credit Corbett while 30 percent credit President Obama.

He also gets most of the blame. Of the 33 percent who believe the state’s economy has gotten worse, 63 percent chalk it up to Corbett. Just 15 percent think Obama is the culprit.

50 percent of voters believe the economy has stayed the same since January 2011.

Perhaps the taint of Harrisburg and state government is what’s bringing the Governor down. The margin of disapproval gets higher the closer the pollster gets to the state Capitol and the budget (his handling of which has never polled well, and earns a 53 to 33 percent disapproval in this survey).

Every group disapproves of the way the state legislature is handling its job, with 51 to 27 percent disapproval overall. Independents are especially frustrated and give lawmakers 37 points of net disapproval, 59 to 22 percent. Republicans, whose party controls every branch of state government, view it negatively by a margin of 38 to 37 percent.

Despite all the negativity associated with Corbett and the legislature in this poll, voters approved more than 2-to-1 of one of their more controversial accomplishments: the Voter ID law.

People polled at 66 percent in favor and only 32 percent opposed. The poll question was phrased thusly:

Sen. Pat Toomey faced a dip in his poll numbers but stayed positive, with 40 percent approving and 27 percent disapproving. This is down from a high last June of 45 percent favorability.

Quinnipiac University conducted the survey from June 5 through 10, calling 997 registered voters’ landlines and cell phones. The margin of error is +/- 3.1 percent.