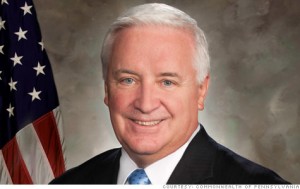 Although his approval has shown a slight improvement over previous polls, Gov. Tom Corbett is still getting a net negative review from voters, with a Quinnipiac poll released today showing that PA voters disapprove of the job he is doing 45 percent to 38 percent.

A Q-Pac poll from June 27th had his approval rating at 50 percent negative and 35 percent positive – and that was a tic worse than their numbers from June 12th, which showed the Guv at 47 to 36 percent disapproval.

Their March poll was the last that showed him not in the negative: he was tied among voters at 41-41. This was part of an overall downward trend Corbett experienced since his spike in favorability last September.

Passing the state’s budget on time for the second year in a row could have been the reason for his slight bump in popularity, although he still trails among certain voting blocs.

Men are split 42-42, while Republicans approve of Corbett 60 percent to 25 percent.

Quinnipiac surveyed 1,168 likely Pennsylvania voters via live calls to land lines and cell phones. The margin or error is +/1 2.9 percent.