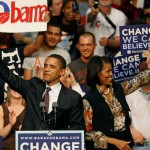 Amid the hubbub over the debt ceiling debate, Quinnipiac University has released the results of its latest survey of the Commonwealth.

The news was mixed for President Obama, whose disapproval rating hit 54 percent among Pennsylvania voters (while 43 percent approve the job he’s doing).  A small majority (52 percent) believe he does not deserve to be reelected.

Both hypotheticals differ greatly from the results of Quinnipiac’s previous Pennsylvania survey, which was conducted in June and found Obama holding significant leads over Romney (47-40) and Santorum (49-38).

“While Obama was slugging it out with Republicans in Washington, Mitt Romney and Rick Santorum were closing the gap in the Keystone State for the 2012 presidential race,” said Tim Malloy, the assistant director of Quinnipiac’s polling institute.  “How much this shift has to do with the just concluded debt ceiling debate is difficult to read.  Again, we’ll have to wait to see if Obama gets a bounce or whether he gets bounced.”

The Quinnipiac survey contains information that would suggest the former.  Pennsylvania voters believe the President handled the debt ceiling debate more responsibly than Republicans in Congress, according to the poll (which concluded last Sunday, the same day the compromise was reached).