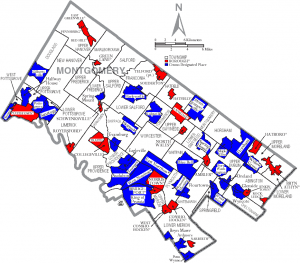 When we asked PA’s politicos what were the races to watch in 2011, we heard about a dozen campaigns going on this year. Over the next few weeks, we’re going to highlight the races that our readers are watching.

It seems no race has the attention of PA’s politicos this year more than the Montgomery County Commissioner race.

It makes sense: Montgomery is the third largest county in PA and with a population over 800,000, it’s larger than a Congressional district.

It’s also been drifting more and more into play. Democrats have never held a majority on the Board of Commissioners, but elections there have gotten closer and closer over the past decade as more Dems moved out of the city and into the suburbs.

PoliticsPA interviewed all of the Commissioner candidates about their campaigns. Click here to read our interview with the Democratic ticket: State Rep. Josh Shapiro of Abington, and Whitemarsh Township Supervisor Leslie Richards.

Republicans enjoyed a voter registration advantage in Montco until 2008, when the surge of presidential primary voters put Democrats over the edge. As of recent registration numbers, Dems edge Republicans by about 244,000 to 209,000, or 46 percent to 39 percent. Last year, Montco was one of just four counties that went for Joe Sestak and Dan Onorato.

However, then-Republican Sen. Arlen Specter defeated challenger (and Montco native) Joe Hoeffel here by a margin of 52 to 45 percent in 2004, though the county went for John Kerry in the Presidential race. And in 2009’s off-year elections, Republicans went six for seven the countywide judicial races. Only Democrat Lois Murphy, who ran for Congress against Rep. Jim Gerlach in 2004 and 2006, was able buck the trend.

Maybe the most interesting election of all was the last commissioner race in 2007.

Castor was the top vote getter in Montgomery County that year, at 26.96 percent of votes cast. Democrat Joe Hoeffel was a close second: 25.05 percent. Republican Jim Matthews earned 24.95 percent, clearing opponent Ruth Damsker by 1.92 percent to take the third spot on the board. Accounting for the fact that a candidate’s maximum performance is 50 percent, Castor defeated Damsker by an adjusted 7.86 percent.

Diving a little deeper into Montco’s 2007 election results, one can’t help but be struck by the tight margins for county row offices. Of 12 countywide seats (including the three Commissioners), only a single candidate managed to clear his or her opponent by more than 4 percent (Republican District Attorney Risa Ferman). The parties split the remaining eight offices four to four, with the following results listed office, margin of victory, winning party.

That’s right, voters decided the county Coroner and Prothonotary by about a third of a percent. It’s incredible, and you’d be hard pressed to find any county in the state as competitive as Montco in 2007.

And then, as if to put the icing on the cake, Republican Jim Matthews entered into a leadership deal with Joe Hoeffel – effectively cutting Castor out of the conversation and creating a pseudo-Democratic majority.

The resulting inter- and intra-party fighting has dominated headlines in the county and the region for years. The real question is whether the race is a local phenomenon, or significant statewide.

“The County Commissioner race in Montco certainly has statewide implications,” said Franklin and Marshall pollster Terry Madonna. “The county leans D but is still a bellweather, maybe not quite like Bucks and Delaware but it’s size makes it a plum.”

“Castor has already run statewide, and Shapiro will be a statewide or congressional candidate in the future.  What record they achieve in office does matter, so how they govern is also important. The squabbling going on might matter given the contentiousness of the issues, so some attention should be paid to the governance record.”

Correction: an earlier version of this story incorrectly indicated that a Republican won the office of Prothonotary in 2007. The winner was Mark Levy, a Democrat.