The ad, titled “Broken Pledge,” zeroes in on broken promises made by Smith while in office. The ad claims that Smith took a taxpayer funded pension, after he said he wouldn’t. 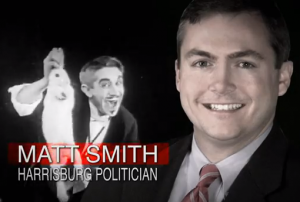 “When Matt Smith ran for office he promised he would not take a taxpayer funded, state pension,” the ad says. “But after the election, he broke his promise and took the pension.But taking taxpayer’s money is nothing new to Matt Smith, he’s voted to raise taxes a million dollars a day for every day he’s been in office.”

Smith campaign manager Jake Pawlak blasted the ad, saying Raja is hiding behind his own record with these attacks.

“Once again Raja is hiding from his own record with another misleading ad distorting Matt’s record of reform. It’s a desperate move from a desperate candidate, and the voters will see right through it, just as they did in last year’s race for County Executive,” said Pawlak.

“This latest attack makes one thing abundantly clear: Raja will say anything to take the voters’ attention away from the fact that he’s made millions outsourcing western PA jobs because he knows that the voters of the 37th district won’t elect a State Senator who doesn’t believe the future can be built in western Pennsylvania.”

The Smith campaign has also been on the offensive in recent weeks against Raja. They released an ad (watch below) blasting him for outsourcing Pennsylvania jobs and for shady business tactics while CEO of his company – all familiar charges from Raja’s run for Allegheny County Executives.

“More false attacks from Matt Smith. Raja’s global company is headquartered here, 94% of its expenditures are here, and it is hiring in Pittsburgh today,” said Haas. “The only candidate in this race who has created good paying American jobs is Raja. Matt Smith’s extensive taxing of small business, manufacturing, healthcare and energy along with his anti-reform policies over the past 5 and a half years have driven jobs out of our region.”

The Race for SD-37 is one of the most highly contested races in the State Senate. Both Raja and Smith have poured their resources into ads thus far in the campaign. The way they are churning ads out now suggests that they won’t stop anytime soon.