An anonymously funded group called “Citizens for a Better Pittsburgh” is slamming Bill Peduto in a new television ad. The spot accuses him of hurting the city for his own City Council district. 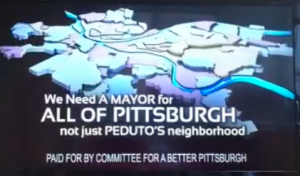 “Bill Peduto wants to be Mayor of Pittsburgh. But Peduto only seems to care about his own district,” a narrator says. The ad ticks off several line items Peduto supposedly opposed during his Council tenure, including funding for Homewood and the Hill District.

“We need a mayor for all of Pittsburgh. Nut just Bill Peduto’s neighborhood.”

According to FCC filings, the organization is spending $26,000 to air the spot on WPXI and $1,600 on WPGH over the next week. The above copy (admittedly shaky, taken by iPhone) aired on KDKA, so the buy is probably around $60,000 this week. That’s on par with spending by each of the top two candidates.

The group is new on the scene, and won’t need to disclose its financials until a May 10 deadline. But the Pittsburgh City Paper explains why many people – including Peduto himself – assume the group is a vehicle for campaign funds from incumbent Mayor Luke Ravenstahl. Namely, Ravenstahl’s campaign loaned the CFBP $20,000 in 2012 and its treasurer, John R. Morgan, has links to the Mayor’s allies.

Ravenstahl has nearly $1 million in the bank when he announced he wouldn’t run for re-election. Many have guessed that he may put it to use against Peduto, a longtime political rival. Though the Mayor has not endorsed in the race, many of his supporters are backing Wagner.

As the CP also notes, “The file also suggests that the agency placing the ad is SRCP Media, which bills itself as a “Republican media consulting firm” with clients that include Swiftboat Veterans for Truth, Mitt Romney, and Mitch McConnell.”

After seeing the ad, Peduto’s campaign called its allegations false. Their response is below.

Wagner’s campaign denied any involvement with the group, which would violate campaign rules. Campaign Manager Henry De Koninick blamed Peduto himself for the tenor of the campaign – and reiterated Wagner’s past criticism of Ravenstahl.

“Jack Wagner has been a vocal critic of both this administration, before and during this campaign, and Councilman Peduto,” De Koninick said. “In fact, Jack has spoke out against the culture of dysfunction in city government caused by the divisive relationship between the Administration and Council. However, unlike Bill Peduto, Jack Wagner has been neither a barrier to progress nor a facilitator of further division.”

Here are the point-by-point responses from Peduto: