The biggest news from Friday was the resignation of the Secretary of Veterans Affairs Gen. Eric Shinseki. The departure spurred reactions from officials throughout the commonwealth so we decided to compile them all here.

“President Obama made the right decision today to accept the resignation of Veterans Affairs Secretary Eric Shinseki. As a soldier who was wounded in combat and as a general who led our troops in battle – Eric Shinseki has served our country with distinction. We owe him a debt of gratitude for his service. I agree that new leadership at the VA will help refocus attention on the health and safety of our veterans who deserve nothing less than quality care from the VA. Acting Secretary Gibson must move expeditiously to address any systemic problems at the VA. He should also immediately look into the waitlist in Pittsburgh and other problems that were reported publicly today. I intend to press the Administration and the new acting secretary to ensure these issues are addressed promptly. I also intend to continue my push for a swift resolution to the disability claims backlog problem so that our veterans can access the level of care they have earned.”

“General Shinseki is a decorated, disabled U.S. Army veteran who served our country courageously for decades.  For his service, we owe him a debt of gratitude.  Nevertheless, his departure from the VA is an important first step in restoring confidence in a troubled department.

“Our men and women who served in uniform should be first in line for the best quality medical care in the world, and too often now, they are not. At the heart of this problem is poor management and lack of accountability, and we need to fix these problems without delay. President Obama should nominate, and the Senate should confirm, an experienced manager and leader who can restore a culture of excellence and ethics throughout the VA.”

Secretary Shinseki’s resignation makes sense, but it does not resolve or absolve what has happened to so many of our nation’s heroes. While the vast majority of veterans in the Third District thankfully receive good care and most VA employees are dedicated servants, the widespread and unthinkable negligence now documented throughout the nation has brought this scandal to the level of a crisis. No veteran should ever have to die waiting for care from a nation he or she honorably served and defended. The Obama administration and members of Congress must continue to fight for answers and accountability until the entire VA system is fully repaired and redeemed, especially for those it has failed.”

“Secretary Shinseki is a dedicated public servant who has served this country with distinction, and we owe him a debt of gratitude for his service. Unfortunately, it has become very clear that his continued service as the top official at the Department of Veterans Affairs will distract from the urgent task of investigating these deplorable abuses and holding the VA accountable,” stated Rep. Thompson.

“Clearly, the bureaucratic challenges that have plagued much of our veteran health care system will not be solved by a new face at the top,” Rep. Thompson added. “However, it is my hope this decision will heighten the level of urgency and thoroughness with which this investigation is carried out and corrective action is taken.”

“General Shinseki clearly understands the importance of having leaders who are accountable, and I believe he made the appropriate decision to resign. We are grateful for his tremendous valor while serving in Vietnam and thank him for his dedicated career of service to our country. While a change in personnel at the VA certainly is necessary given the inexcusable delays in providing medical care to our veterans and deceptive manipulation of records, there also must be a fundamental change in the culture at the VA. That change can occur only if the President demonstrates leadership and insists that everyone at the VA be accountable to our veterans, their families and taxpayers.

I know that the vast majority of VA employees are dedicated to serving veterans and their families and work hard every day to do just that. But without serious reforms throughout the VA system, the exemplary efforts of the majority will be overshadowed by those who game the system and put their self-interests ahead of the interests of our veterans.  In the House, my colleagues and I already have acted on several fronts to ensure that our veterans have access to the high-quality medical care they’ve earned and to give the VA Secretary the flexibility all managers need to fire those who are not doing their job before they destroy the morale of competent co-workers and cause harm to our veterans. I am hopeful the leaders of the U.S. Senate and the President will join with us in these efforts.”

Eric Shinseki has dedicated his life to the service of his country and he has served with honor and bravery,” said Congressman Meehan. “But the revelations of the last several weeks have made it clear that he is unable to manage the V.A. bureaucracy. New leadership at the V.A. should be the start of a top-to-bottom reform that will investigate wrongdoing, hold employees accountable, and improve the care our veterans receive.”

“I have always believed that cabinet members serve at the pleasure of the president, and in this case President Obama clearly felt that Secretary Shinseki could no longer adequately lead an agency that has suffered such a scandal and loss of public confidence.  I thank General Shinseki for his long and distinguished career in service to his country.  I also note that this is one event in this sad affair that the president will not have to learn about from the news media.

“The deplorable treatment of veterans at VA medical facilities is something that no American should tolerate.  The Inspector General’s report is yet more evidence that the problem is systemic, widespread, and certainly not limited to one hospital in Phoenix.  I continue to believe that a Department of Justice investigation is warranted to determine the full scope of the flaws and to identify responsible parties.

“In the House, we have already taken steps toward reforming the VA with the bipartisan passage of a measure that would give the secretary greater latitude in removing senior officials in the agency.  I wish the Senate would follow our lead.  In the meantime, there are a number of proposals being offered to improve the VA and its service to veterans and I am eager to examine each one on its own merits.  At the very least, this pokes a very large hole in the belief that government is the first and best solution to health care needs.”

The problems at the VA highlighted by specifics revealed from Phoenix to Pittsburgh are bigger than any one person,” said Rothfus.  “Secretary Shinseki’s resignation does not solve the problem and I call on all Members of Congress to keep the focus on results for our veterans.

“The VA must develop a culture of accountability to better serve our veterans.  That culture is missing now.  We hear about the problems and the huge bonuses, but we never hear about any accountability.  This has to change.

“The House has passed bipartisan legislation to address this.  The Senate should pass it, the President should sign it.  The new Secretary must commit to using these powers to instill a culture of transparency and accountability at the VA to better serve veterans.”

“Given the political pressure, it’s not surprising that the President accepted Shinseki’s resignation. However, that act does not get one more veteran the medical care they deserve. We still need to find out how widespread these abuses were and we need to correct them. Resignations don’t solve problems, they just give the appearance that the President is doing something. We shouldn’t lose sight of what the real problem is: veterans who weren’t seeing their doctor in a reasonable amount of time.”

“Secretary Shinseki’s resignation today is a step in the right direction. By no means is the system fixed with his resignation, but it is a start towards fixing our deeply troubled VA system. In listening to Veterans across the district I have come to the following conclusion.

The issues that the VA faces are systemic and extend past the Veterans Health Administration (VHA). First and foremost we need to stop using our veteran’s and their benefits as a political football that Democrats and Republicans kick around to score cheap political points. The fundamental problem currently facing the VA is the bonus system.

Service should be equally exceptional at every VA. While the benefits arm of the VA, the Veterans Benefit Administration (VBA), has improved dramatically, the VBA still faces an excessively deep backlog in aiding and assisting our heroes in their pursuit of the highest quality healthcare we can offer them for their sacrifices. When we create bonuses for meeting performance requirements, we promote a system in which VA managers have incentive to misrepresent the facts, placing a price on every soldier’s life.

Continuity of care from one VA medical center to another is a major issue that we can address. The bonus system runs contrary to providing quality care by focusing on quantity of care. We need to be proactive. We need an increase in innovation. The Third District spans a group of incredibly rural areas. Oftentimes the burden of travel for a veteran to their nearest Veterans Affairs Medical Center (VAMC) is so cumbersome that they cannot seek the quality care they deserve. We should expand the VA care options by creating mobile clinics and harnessing digital technology to offer web and video based care or telemedicine. When we focus on creating more access to care, we can reduce hospital stays where risks of incidents, like the legionnaires outbreak at the Pittsburgh VAMC, are too high. I’ve heard from more than one source that the VA only has the resources to care for the veterans who seek care when they could be meeting veterans halfway – where they are.

Our vets, including the thousands still returning from Iraq and Afghanistan, deserve the best. It’s time we start demanding to provide them with the best of services, including Congress properly funding their healthcare, promoting transparency within the department, and ensuring accountability to the brave men and women who have sacrificed so much for our country,” LaVallee closed.

“We have known about the problems at the Department of Veterans Affairs for years, but it took political scandal for politicians in Washington to pay attention. While Secretary Shinseki’s resignation was likely necessary to accomplish the systemic reforms needed at the VA, I hope the focus in Washington will remain on our veterans and not dissipate with news coverage.

“As an Iraq War veteran, primary care physician and former health policy advisor to the Navy Surgeon General, I’m intimately familiar with the shortfalls of the VA healthcare system and what can be done to address and rectify these issues. As a Representative in Congress, I will continue to be a tireless advocate for our veterans who have risked, and sacrificed, so much for our country.” 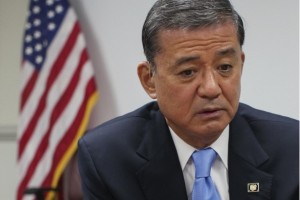