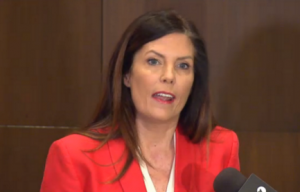 We’ve collected the reactions of various officials and candidates to the guilty verdict in the Kathleen Kane case. Governor Wolf’s is already detailed here.

The rest are presented below:

“Today is a terrible day for the Commonwealth of Pennsylvania,” Gleason said. “It is time to bring honor and respect back to the Office of the Attorney General and that is why we will work shoulder to shoulder with John Rafferty to see his vision of reform become a reality.”

“Attorney General Kathleen Kane’s conviction today marks a sad day in the history of Pennsylvania and the culmination of a very troubling series of events that have distracted the Office of Attorney General from its mission to protect the people of Pennsylvania from crime and fraud,” Rafferty said.  “Kane campaigned on the slogan ‘A Prosecutor, NOT a Politician,’ but it turned out to be just words as she spent far more of her time concerned with her own political ambitions and exercising petty political vendettas than the important work of protecting Pennsylvanians and their families.”

“However, I do believe this sad chapter can serve as a turning point and an opportunity for Pennsylvania to reform this important office with new leadership that will place the protection of people from crimes and fraud over politics.  In this year’s Attorney General race, I am more qualified and experienced than my opponent and I am the only one who has promised to check my political ambitions at the door by pledging never to seek higher office if elected.  I will concentrate my full attention on ensuring Pennsylvania is a safer place for all of us by restoring integrity to the Office of Attorney General, attacking the heroin epidemic and going after predators who are preying on our children and seniors.”

“Sadly, my opponent will be nothing more than a continuation of the failed Kane Administration.  Commissioner Shapiro views this office as a political stepping stone to the Governor’s Mansion, and with zero relevant experience I fear he would commit the same transgressions we have seen over the last four years.”

“It’s time for a new direction.  On November 8th, Pennsylvanians will have an opportunity to restore integrity, public confidence and effectiveness to the Office by electing me to serve as our next Attorney General.”

“This is another sad chapter for our Commonwealth and a reminder of how hard we need to work together in Pennsylvania to restore the public trust in our democracy.

Given the verdict, I believe the Attorney General should resign.

We should remember that the real victims of these scandals are the people of Pennsylvania who’ve been left behind by a government that often isn’t working for them. We need to restore integrity to our justice system so that the people’s business – protecting consumers, fighting the heroin epidemic, and keeping our communities safe – comes first.”

“Pennsylvania cannot have a top law enforcement officer who is convicted of breaking the laws she was elected to enforce. Legislative leaders, both Republicans and Democrats as well as the governor have called on Ms. Kane to step down for more than a year. With the heroin epidemic endangering the lives of our residents on a daily basis, and ongoing battles against organized crime and child predators, the people of this state deserve and need a functional attorney general.

“It is past time for this saga to end, and it is time Ms. Kane puts the interests of the people of Pennsylvania before her own. It is time for Ms. Kane to resign.”

“Tonight’s conviction of Pennsylvania Attorney General Kathleen Kane is unbelievably disappointing, but, unfortunately, not surprising. While far too many Pennsylvanians have come to expect this type of politicking, corruption and abuse of power by too many in Harrisburg, this brazen abuse of power must not represent the ‘new normal.’

Having spent virtually my entire career arresting corrupt politicians as an FBI Special Agent, and having served as a National Supervisor in the FBI’s Political Corruption Unit, I can tell you firsthand how instances like this by career politicians erode citizens’ trust in their government at its core. These continuous violations of the public trust must end. Too many in Harrisburg and Washington see themselves as above the rules and free from the scrutiny of those they represent as elected officials.

If we really want to reform the system, we must change those we send to represent us. This change can only come from those outside of the system – it cannot, and will not, come from career partisan politicians like Steve Santarsiero who represent a perpetuation of the broken status quo that results in endless corruption and erosion of trust in government.”

“For the third time in the past year, I have to state publicly that Kathleen Kane’s continuation in office as attorney general is not tenable. I took this position last August, when she was charged with crimes that go to the very heart of the fair and impartial administration of justice. I took the same position six months ago, when the consequences of those charges compelled the Senate to consider whether an attorney general could function without an active law license. And tonight, I take no pleasure in reiterating that position upon her conviction.

“It is well past time for the drama and turmoil in the Office of Attorney General to come to an end. I urge Ms. Kane to finally put the public interest first and resign her position immediately.”

“It is unsurprising that yet another Clinton insider has chosen to lie under oath to hide their unethical behavior. There is a pattern of criminal behavior that seems to follow Clinton and her allies around. This is another example of Clinton World promising ethical behavior and yet not following through.

No one running for the highest office in the land should be above the law, but Hillary Rodham Clinton has chosen to set the precedent for lying criminals like Kathleen Kane instead.”