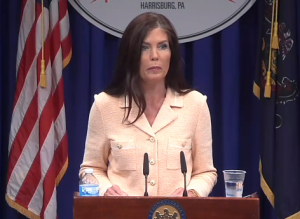 We’ve collected the reactions of various officials and candidates to Kathleen Kane’s decision to resign. They are presented below:

“Tomorrow, Pennsylvania can finally begin to move forward from this shameful chapter in its history,” Gleason said. “If the saga of the past two years has taught us anything, it’s the need to elect an Attorney General who will make serving their constituents their top priority. Republicans are proud to have John Rafferty as our Attorney General candidate, and we look forward to helping him win this November.”

“The only issue I have with Attorney General Kathleen Kane’s decision to resign is that it is long overdue,” Rafferty said. “I have called and voted for Kathleen Kane’s removal months ago because of the serious nature of the charges she was facing, and more importantly because I knew the Office of Attorney General could not operate effectively under the weight of these many distractions.

“The next Attorney General must steer the Office away from the culture of chaos and petty political vendettas and return its focus to doing the important work of protecting Pennsylvanians from crime, fraud and abuse. When I am elected Attorney General, I will provide the leadership necessary to provide for the protection of people from crimes over politics.

“I am more qualified and experienced than my opponent and I am the only one who has promised to check my political ambitions at the door by pledging not to seek higher office if elected attorney general. I will concentrate my full attention on ensuring Pennsylvania is a safer place for all of us by restoring integrity to the Office of Attorney General. My focus is on attacking the heroin epidemic and going after predators who are preying on our children and seniors.

“Lastly, I would like to send a message to the hardworking men and women who are employed in the Office of Attorney General, who have had to deal with this nightmare – help is on the way, keep the faith.”

“This is a sad moment for our Commonwealth and now that the Attorney General has chosen to step down we must work together to restore public trust in our democracy and ensure the people’s business – protecting consumers, fighting the heroin epidemic, and keeping our communities safe – comes first.”

“Ever since Kathleen Kane was sworn into office she has established a repeated pattern of misbehavior in office and abuse of power in a disgraceful attempt to place herself above the law. Yesterday, the law won and she will be held fully accountable for blatantly ignoring the Constitution and the rule of law.”

“Almost a year ago, the Pennsylvania Supreme Court suspended Attorney General Kathleen Kane’s law license after she was held on charges that she illegally leaked confidential information to the media. At that time, I was one of only a few Democrats to urge Attorney General Kane to put the interests of the commonwealth first and to immediately resign from the office of chief prosecutor.

“Today, after a jury convicted her on several felony and other charges, she has announced her resignation effective tomorrow.