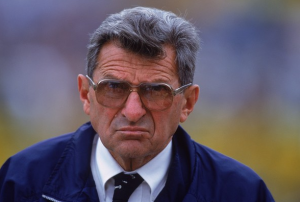 Another shoe dropped in the Sandusky scandal late last week.

A new report from Charles Thompson of the Patriot News revealed that one victim claimed to have informed head coach Joe Paterno in 1976 that he had been abused by assistant coach Jerry Sandusky.

There were also additional instances in 1987 and 1988 when assistant coaches witnessed Sandusky behaving inappropriately with children. The latter incident was allegedly referred to the university’s Athletic Director.

Then, Jeremy Roebuck and Susan Snyder of the Inquirer reported that Penn State had settled in those cases.

Additionally, the victim in the first case told Sara Ganim of CNN he spoke to Paterno over the phone and that the coach accused him of making the incident up.

These revelations fit alongside the findings of the Freeh Report, which showed that Paterno knew of a 1998 investigation despite testifying that he did not know about any sexual assault claims until 2001.

Furthermore, Freeh found that Paterno convinced then-Athletic Director Tim Curley not to report the 1998 incident to the PA Department of Welfare.

What we want to know, however, is what you think.

Do You Believe Joe Paterno Covered Up Jerry Sandusky’s Crimes?