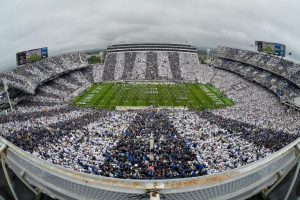 The discussion on allowing college athletes to be financially compensated for their work and profit off of their name, image, and likeness has just begun in Pennsylvania. PoliticsPA readers believe that legislation similar to California’s, which became the first state to sign such a bill into law, should be passed in the keystone state.

Just over half, 53% of votes in the PoliticsPA poll, support House Bill 1909, first circulated in a memo from Democratic Allegheny state Reps. Ed Gainey and Dan Miller. 42% voted that Pennsylvania shouldn’t pass this kind of legislation and 4% said they were undecided.

The original memo from Gainey and Miller said the legislation would “empower our college athletes and make sure that they are fairly compensated for their work and efforts,” and allow them to sign “endorsement deals, earn compensation for their name, image and likeness, and sign licensing contracts that will allow them to earn money.”

“Please join us in standing with our collegiate athletes and allow them a better chance to profit from their own hard work and effort,” stated at the end of the memo.

Gov. Tom Wolf signaled support for having a conversation about the topic in a statement, while state Sen. Scott Martin (R-Lancaster) and state Rep. Brian Sims (D-Philadelphia), both former college athletes, said that “they could support some form of compensation for players but that compensation through endorsements may not be the best option,” according to The PLSReporter.

193 people weighed in on this poll.

3 thoughts on “Reader Poll: PA Should Pass a ‘Fair Pay To Play Act’ for College Athletes”