Republicans are growing closer to consensus on plans for Congressional redistricting and the map that they’re describing sounds very similar to that published last week by the Cook Political Report.

PoliticsPA spoke with several Congressional sources as well as outside consultants to determine the broad strokes of the GOP’s plan.

They say David Wasserman, who composed the Cook preview, has good sources and his analysis is the closest yet “to reality.” The complete report is behind a paywall, but you can view the full sized Cook map of PA here, and the SEPA map here.

Now that the census data is out, discussions will begin in earnest. DC Republicans are maintaining strong, open lines of communication with leaders in Harrisburg, and sources indicate that the relationship has been productive so far.

The technological developments since the last census will make the process far easier, they say, with unprecedented speed and accuracy. Negotiations between members of the delegation will take place with the aide of mapping software that instantly populates hypothetical maps with population data, as well as data from a decade of election results. Sources described it as “the exact same thing” as the popular online Redistricting Game, but “with better data.”

Here are some of the redistricting ideas that are generating growing consensus among the GOP. 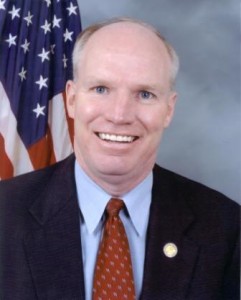 The most striking feature of Republicans’ tentative plans is the change to Tim Holden’s 17th Congressional district. Currently, the 17th covers all of Holden’s home county of Schuylkill County, as well as Dauphin and Lebanon. The district comprises parts of Perry and Berks counties as well.

Republicans are talking about stretching his district up to the Democratic stronghold of Scranton, so as to make freshman Rep. Lou Barletta’s district far more favorable to the GOP. This idea has really caught on in the past two weeks, and appears more likely every day.

In addition to taking Scranton out of Lou Barletta’s district, the Holden plan has the benefit of taking the Congressman out of Republican portions of Lebanon, Berks, and Dauphin counties.

“In one move, you can neutralize Scranton, protect Barletta, and give the Southeast Republicans space to move west and pick up more GOP votes,” said one DC insider close to the process. “If you can think of a better way to do all that, I’d like to hear it”

This reflects a lesson learned by the GOP, who tried to draw Holden out of his district ten years ago, only to have the senior Republican in the delegation, George Gekas, lose to the scrappy Democrat in the ensuing campaign.

Tom Marino’s 10th distrct would move west, toward the center of the state and into more Republican-friendly territory.

The seat targeted for dissolution would be that of Rep. Mark Crtiz. The GOP is looking at ways to attach Critz’s Democratic base in Johnstown to the district of Rep. Jason Altmire, whose district would itself lose Democrats to the Pittsburgh-based district of Rep. Mike Doyle.

That would set up a Democratic primary between Altmire and Critz.

Republicans emphasize that they’ll be conservative this time. They’ll be drawing out a Democratic seat for sure, but they won’t attempt to make every Democratic seat more competitive as they did in 2001. They are trying to protect their gains of 2010.

The main question, how competitive will the GOP the merged Altmire/Critz district, will likely fall to Rep. Bill Shuster. If he is willing to take traditionally Democratic counties of Fayette and Green, the the new seat will be much more achievable for Republicans. If however Shuster wants to maintain his lopsided party registration advantage, Republicans may cede the Altmire/Critz district to Democrats.

So far, sources indicate that Shuster is cool to the idea of bringing more Democrats into his district. He argues that the delegation needs a few solidly red seats in order to help other members of the delegation with fundraising and other political affairs.

In addition to Shuster, Rep. Mike Kelly will have the chance to make the Altmire/Critz district more competitive. The more Lawrence County voters he takes on, the more of a tossup the new district becomes. Additionally, it’s expected that Kelly will acquire the southern half of Butler County (his home county, political base, and a heavily Republican area). 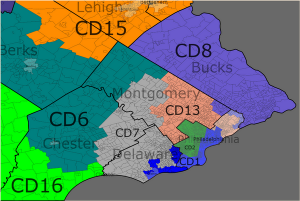 Republicans acknowledge that no scenario allows them to totally protect their delegation in southeast PA, which had trended steadily Democratic prior to 2010.

Democrats see that, too. They’re looking at historical election patterns and taking heart, despite the fact that Republicans control the process. More than any other state in the nation, PA has GOP congressman who represent districts won by Barack Obama in 2008 and John Kerry in 2004. SEPA especially gives them hope.

“The redistricting process in Pennsylvania will take some of the most endangered Republican districts in the country and make them even more competitive,” said Josh Schwerin of the Democratic Congressional Campaign committee. “With strong Democratic challengers, this will mean more top pickup opportunities for Democrats in the state.”