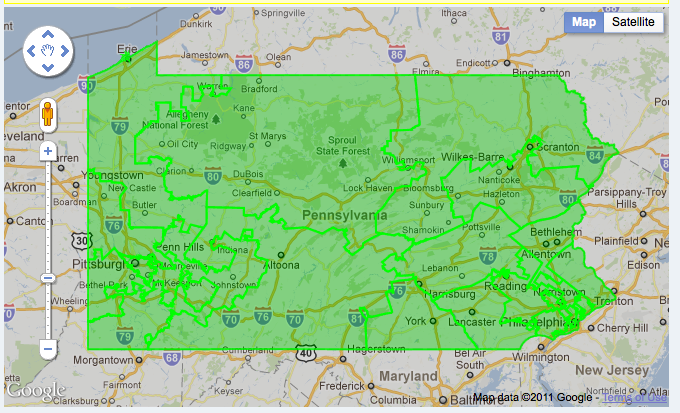 This afternoon, the Legislative Reapportionment Commission launched the official website for the body that will draw the boundaries for the General Assembly and PA Senate. Click here to see the site.

The site will allow you to check out the timeline for new districts, view Commission hearings, learn more about the members of the Commission and compare maps of the 1991 and 2001 General Assembly and Congressional boundaries to the ones developed in 2011.

It’s pretty nifty, and a great resource for political junkies.

Barry Kauffman, the Executive Director of Common Cause Pennsylvania, has been critical of the redistricting process in the state. But he had positive words about the website.

“If someone had told me a year ago that this kind of website would be up and running today, I probably would not have believed them,” Kauffman said. “This website opens up the redistricting process and empowers citizens in ways that we have not seen before.  I hope citizens will use this new tool to protect their communities’ interests and political clout.”

The Commission will now hold a series of public hearings and when the General Assembly comes back for the fall session, they will vote on the new boundaries.

One of the members of the Commission, Senate Majority Leader Dominic Pileggi (R-Delaware) echoed Kauffman’s sentiment

“I hope this website leads to greater public involvement in the redistricting process. It’s a great tool to contact the Commission, learn the basics of redistricting, and stay informed as the Legislative Reapportionment Commission’s work progresses. This is another step forward in our ongoing effort to change the culture of Pennsylvania state government. In recent years, we have rewritten the Right-to-Know Law and created an Office of Open Records, created a searchable eLibrary of state contracts, strengthened the Sunshine Law, and passed a law creating an online database for the state budget.”

With openness in mind, the Commission will now get down to drawing boundaries that can pass the General Assembly and survive court challenges.

Correction: An earlier version of this story suggested that the Legislative Reapportionment Commission was responsible for redrawing Congressional boundaries. In fact those are determined by statute. However, draft congressional maps will be available on the Commission website.