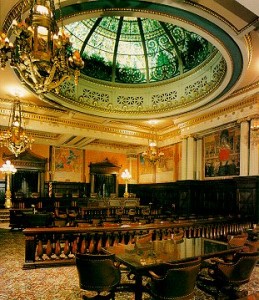 Pennsylvanians for Modern Courts and PMCAction strongly support the recent introduction of legislation in the House of Representatives formulated to implement a Merit Selection system for selecting appellate court judges, replacing the current system of partisan elections.

The change requires a constitutional amendment and would only apply to the three statewide appellate courts: the Supreme, Superior and Commonwealth Court.

According to PMC, Merit Selection is “a hybrid system that combines the best features of appointive and elective systems and adds a new component- a independent, bipartisan citizen commission that screens and evaluates potential candidates for the bench.”

Lynn A. Marks, Executive Director of PMC and PMCAction, explained, “Pennsylvanians deserve a system that bases judicial selection on candidates’ credentials, not their campaign war chest, political affiliation, where they live, a familiar name or where their name appears on the ballot.”

The proposed constitutional amendment would create a 15- member citizens-bases Appellate Court Nominating Commission to screen judicial candidates and develop a short list of potential nominees for governor. Following nomination by the governor and confirmation by the state Senate, a judge would serve an initial term of 4 years and would then stand before voters in a nonpartisan retention election. Votes would decide at that point, and again every 10 years, whether the judge should stay on the bench.

In the mist of increasingly expensive and partisan elections, Pennsylvanians are becoming more concerned about court and judges. A 2010 poll conducted by Public Opinion Strategies unveiled that 75% of Pennsylvanians believe that campaign contributions affect the decision judges make in the courtroom.

Also, 93% of the people would like the opportunity to vote on whether to change how we select appellate court judges. These bills are the first step in the process toward giving people the chance to decide whether there is a better way to select those judges. “We certainly hope Pennsylvanians will get the change to make their voices heard on this important issue,” said Marks.