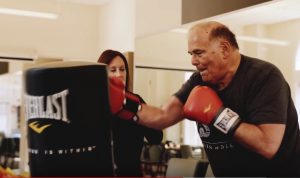 Speaking alongside doctors at the University of Pennsylvania, Rendell, 74, said he was first diagnosed with early-onset Parkinson’s more than three years ago. Since his diagnosis, medication and physical therapy have stabilized — and in some cases, improved — his symptoms, Rendell said.

“When it happened, I was stunned,” Rendell said. “Stunned because, like many of us, I’d always viewed myself as indestructible.”

Rendell said he first noticed possible Parkinson’s symptoms years ago. Family and friends recommended he consult a doctor, who revealed he had the neurological disorder.

“I started to have some symptoms that worried me a little bit. My hands started to shake a little bit, and I was having more trouble with my balance than usual,” Rendell said.

Doctors recommended medication and physical therapy, and 3 1/2 years later he appeared upbeat about the future.

“The good news is, I can say without fear of contradiction … that my disease has stabilized,” Rendell said. “The progression has, in many ways, stopped. Some of the symptoms I was undergoing are better than they were 3 1/2 years ago.”

The former governor used the opportunity to press others to seek diagnosis and treatment. None of the care he received was limited to powerful political figures, he stressed — anyone with the proper health insurance can get care for the illness.

“It’s not a death sentence, Parkinson’s disease. It doesn’t have to affect your quality of life,” he said.

Penn Medicine rolled out a video Monday on Rendell’s case and the medical system’s treatment options. In the video — which flashes back through Rendell’s political career — Dr. Matthew B. Stern of the University of Pennsylvania details his treatment and status.

“Our treatment for the governor has not been to overload him with high doses of medications that might give him side effects, in order to eliminate his symptoms entirely,” Stern said. “He is intellectually sharp, he is on-target, he is active, he is busy, and our mission is to keep him there.”

Rendell is a towering figure in Pennsylvania politics. He served two terms, from 2003 to 2011, during which he also served a term as chairman of the Democratic National Committee.

Pennsylvania political figures responded quickly to the news. In a press release and a series of tweets Monday, Gov. Tom Wold wished Rendell well and praised him for encouraging others to seek treatment.

“Frances and I are sending our thoughts and encouragement to our friend Ed Rendell today. Pennsylvania has seen few leaders as tough as Ed and we have full confidence that neither has Parkinson’s disease,” Wolf said. “Ed should know that the entire commonwealth is standing behind him and hoping for the continued success of his treatment and therapy.”

“Thank you @GovEdRendell for coming forward with your fight with Parkinson’s Disease and efforts to inspire others to have symptoms checked for early diagnosis. Parkinson could not have a more formidable adversary,” Senate Majority Leader Jake Corman wrote on Twitter.