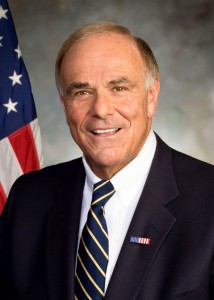 And Rendell joined the chorus of criticism of Obama’s attacks on finance, whose leaders have written checks to many members of both parties.

That’s the portion of the interview that the Romney camp emailed. Rendell continued,

“I think Bain is fair game, because Romney has made it fair game. But I think how you examine it, the tone, what you say, is important as well.”

As for Booker, “I admire him,” Rendell said. “People in politics should tell the truth. He could have qualified it better, he could have framed it better, but if you’re in this business, none of us like negative ads.”

Update: Rendell has repeatedly said that Bain is fair game, as he did in this video posted by the DNC on Monday (0:34 mark):

“Governor Romney has in fact made his experience at Bain capital one of the central points of why he thinks he should be President, so it’s only fair that there is a full examination of what Bain Capital did and what they didn’t do for the American people.”

The recent objections by prominent Democrats has turned something that started out as an effective hit against Romney into a political headache for the Obama team.

Booker, a rising star in the national Democratic party, got the ball rolling on Sunday when he called such attacks “nauseating” on Meet the Press.

But attacking private equity may not help candidates all the way down ballot who rely on financiers for campaign contributions. As former chairman of the Democratic National Committee, Rendell is more than aware of how integral the financial sector is for the party’s fundraising.

Salon takes a look at the evolving relationship between Democrats and the world of finance, and finds far more cooperation than discord since the 1990s.

Bain itself illustrates this point. Its employees have actually given more political contributions to Democrats than Republicans, by a lot: $1.2 million for Dems to $480,000 for the GOP. Even Obama himself has received $80,000 from Bain employees.

On a separate subject, Rendell also offered some interesting contrasts between Obama and former President Bill Clinton. Namely: Obama isn’t nearly as much of a party builder.

He added, however, that he hasn’t heard of officials getting Clinton-style calls from Obama at 11:30 at night to ask about local issues. That, said a former Clinton aide, is simply a product of how Obama rose to power.

“He’s not as engaged in building Democratic institutions in different states,” the consultant said. “If you think about how he came to beat Hillary and become president, he did not go through typical Democratic institutions — he ceded that to Hillary. Eventually some started to come his way. I don’t know if there’s as much of a reliance on building these operations state by state.”