This week Republican Representatives Bill Shuster (PA-9) and John Mica (FL-7) unveiled their plan to allow private companies to bid on the Northeast corridor of Amtrak, which runs from Washington, D.C. to Boston. 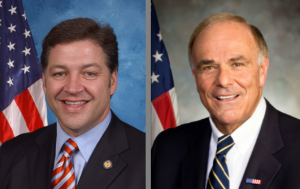 Rendell called into Shuster’s and Mica’s joint press conference and explained his support saying, “I’m not a critic of Amtrak. Far from it…But the only way you’re going to get that money to make this project a reality is you have the states, the federal government and private companies at the table.”

Rendell has been a long-time crusader for establishing a high speed rail between Philadelphia and New York City hailing the positive economic benefits it could reap, such as creating 45,000 construction jobs over 25 years, up to 120,000 permanent jobs, and relieving overloaded regional highways and airports.

Shuster explained the legislation in a press release. “It is time to deregulate America’s passenger rail system, and give intercity passenger rail the same opportunity for success that the freight rail and commercial truck industry have benefited from…We must look for more effective and innovative approaches to providing modern and efficient passenger rail service by focusing on projects that make sense, leveraging private sector investment, increasing competition, and opening the door to public-private partnerships…Both around the world and right here in the United States we have seen that competition works.”

Shuster’s proposal is part of a series of budget cutting and government privatizing initiatives promoted by the Republican controlled House of Representatives. Amtrak is the nationalized remains of the private rail enterprise that went under in 1971. Since then it has not been consistently profitable, during the last recorded fiscal cycle it lost $707 million; Shuster asserts that his plan would circumvent the unprofitably problem by only introducing private competition into the profitable areas of Amtrak.

Shuster’s plan has, predictably, elicited criticism from Amtrak. President and CEO Joseph Boardman issued a press release that warned, “we have a basic duty to the public to ensure that we’re looking after their interests, and the last thing the Northeast needs is a plan that’s poorly thought through and that doesn’t take key issues into account.” He went on to say that he will make a final assessment of the legislation when it is formally introduced this week.

And, in an editorial this morning, the Philadelphia Inquirer alleged that moves to privatize Amtrak ran the risk of backfiring against the production of high speed rail. They cited Democratic Senator Frank Lautenberg’s (New Jersey) caution that the highway I-95 would need seven new lanes to absorb today’s rail riders should privatization efforts disrupt rail service in the Northeast.

The legislation will be proposed officially this Wednesday.