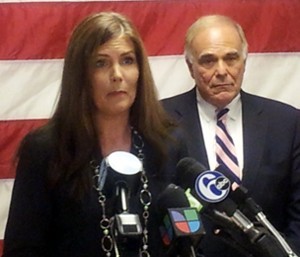 There weren’t many people willing to speak up for Kathleen Kane today.

After the AG revealed she wouldn’t be making an appearance, her controversial Chief of Staff Jonathan Duecker took her place. Then, former Acting Attorney General Walter Cohen bailed on Kane.

Despite all that, yesterday promised an open microphone and a rapt audience so Governor Ed Rendell was there.

The ex-Gov urged the Senate to give up on their removal process and start impeachment proceedings instead.

Rendell noted that if the Senate removes Kane because of her absence of a law license and the State Supreme Court restores it, there would be a crisis. He also asserted that a law license isn’t necessary to the job by citing his own experience as Philadelphia’s DA.

“At least 97 percent” of his job didn’t require a law license, Rendell estimated.

“I know that this is a controversial subject,” Rendell said. “And if you believe that the attorney general’s conduct was egregious, the proper remedy is impeachment. If your main complaint is the way she conducted herself in office, impeach her.”

Finally, it wouldn’t be a Rendell appearance without a parting zinger.