Rep. Pitts Calls Arafat, Sharon to Come Back to the Table 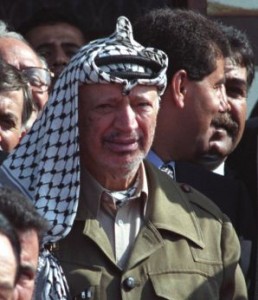 Update: Pitts’ office chalked the letter up to administrative error and apologized. Full statement below.

Rep. Joe Pitts recently replied to a constituent’s letter with a rather interesting position on the Israeli-Palestinian conflict: Yasser Arafat and Ariel Sharon need to come back to the negotiating table. There’s just one problem. Arafat has been dead since 2004 and Sharon in a coma since 2006.

The out-of-date letter was posted on the blog Mondoweiss by journalist Ian Rhodewalt. His father, a resident of the 16th district, wrote a letter to Pitts in 2011. His response came last month, and included this description of Pitts’ stance:

With the global war against terrorism, it is now incumbent on Prime Minister Ariel Sharon and Palestinian Authority (PA) Chairman Yasir Arafat to clamp down on Palestinian extremists that have perpetuated violence and to restart a peace process that has collapsed.

The original blog post was published Sunday and the story was picked up Tuesday by the Times of Israel.

His Democratic opponent, veteran and businesswoman Aryanna Strader, jumped on the news as well.

“Being this completely out of touch with such a major foreign policy matter is inexcusable,” she wrote in an email to supporters. “If we are ever going to change Congress, we must change who we send there. And that is why I am asking you to please make a $16 contribution to our campaign today.”

Form letters are a part of life in Washington, as any staffer can tell you. To prepare a customized response to every letter or email received by a congressional office would be impossible without ballooning staff numbers (and payroll) – an ironic outcome to those constituent letters advocating reduced government spending.

Pitts is far from the first member of Congress to take lumps over a form letter.

In 2009, the office of Senator Arlen Specter issued a form letter which justified the Defense of Marriage Act and left the door open to a constitutional amendment banning same sex marriage. Awkward, since the constituent writing him had advocated the exact opposite. And particularly untimely, since Specter had recently switched parties and sought to court the LGBT vote.

Though any form letter runs the risk of being on the tone deaf side, niche issues are particularly risky.

An acquaintance of this writer, for example, recently sent a letter to Rep. Bill Shuster in protest of HR 4089 on the grounds that it permitted U.S. hunters to import sport-hunted polar bears from Canada.

His response? To reiterate his support for humane treatment of pets like his Wheaton Terrier, Chloe.

The moral of the story: staffers should review all form letters at least once a year.

“Congressman Pitts responds to tens of thousands of constituent inquiries a year.  Because it is impossible to draft a unique reply to each inquiry, language is often reused for similar responses.  In this case, a double mistake was made.  Language that should have been archived was included in a draft response.  The response was then pulled from the queue because of the error, and then mistakenly sent almost a year later.  Responding to tens of thousands of letters a year is a complicated process.  Mistakes are both few and rare, but do sometimes occur.  This one was particularly embarrassing.  We have apologized to the constituent and are reviewing our internal process to make sure this sort of thing can’t happen again.”