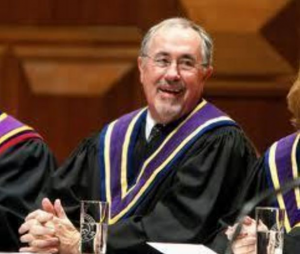 According to Angela Couloumbis of the Inquirer, the report recommended that any disciplinary action against Eakin be handled by the Judicial Conduct Board.

The Court hired the Pittsburgh law firm of Joseph A. Del Sole to look into the matter.

“We consider some of the materials that Justice Eakin sent, and many that he received, to be of serious concern,” they wrote. “However . . . we do not believe that they give rise to the type of extraordinary circumstances warranting immediate intervention of the Court.”

Justices Debra Todd and Correale Stevens both issued statements calling for the Board to once again review Eakin’s case.

“I am disappointed and offended, both personally and professionally, by much of the content,” Justice Todd wrote. “It should be abundantly clear that all of our Commonwealth’s judges are expected to conduct themselves, in both their personal and public lives, in a manner that promotes the public’s trust and confidence in the judiciary. Our citizens deserve nothing less.”

“I am pleased that the review of emails conducted by Joseph Del Sole on behalf of the Supreme Court agrees that they are ‘detrimental to the judicial system’ and ‘could cause a reasonable person to question the impartiality of a judge and the judicial system.’

To those who view them, they ‘offend,’ as Justice Todd wrote in her concurring opinion, by ‘trivializing physical and sexual assault’; they offend ‘by the derogatory stereotyping and mocking of racial, ethnic, and religious groups, as well as gays and lesbians.’

I agree that some of the emails raise ‘serious concern’ and I await the findings of the Judicial Conduct Board.”