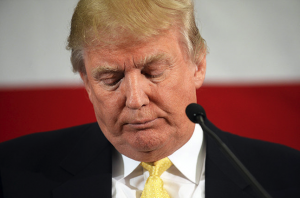 Boasting of a $10 billion net worth, and countless business dealings across the globe, Donald Trump is expected to use his business acumen and experience to sell himself to the American public.

Having all but wrapped up the Republican Party’s nomination for president, the real estate magnate will find many supporters looking for someone to balance the country’s books and “Make America Great Again.”

While Trump’s business record is undoubtedly lengthy, it has been questioned in many reports by those on the other end of his wheeling and dealing.

In what Trump would likely dismiss as a takedown piece by the “sleazy, dishonest” media, a USA Today investigation found hundreds of people who say the presumptive GOP nominee didn’t pay them for their work.

In 1984, Edward Friel – Paul’s father and owner of the Edward J. Friel Co. founded in the 1940s by his father – met with Trump after submitting the final bill.

Trump told Friel he would not be receiving the final payment of the contract due to inferior work – which had been approved by Harrah’s casino manager. Then Trump offered to hire Friel on other projects he was working on.

“Wait a minute,” Paul Friel told USA Today about his family’s reaction to Trump’s mixed-message meeting with his father. “Why would the Trump family want a company who they say their work is inferior to work for them in the future?”

Trump’s non-payment of $83,600 to the Philadelphia cabinet company kick-started its path to bankruptcy, Paul Friel said.

“That began the demise of the Edward J. Friel Company … which has been around since my grandfather,” Friel said.

The Edward J. Frield Company filed for bankruptcy in October 1989, five years after fulfilling their contract with the Trump Organization.

The Friels were by no means the only people to face off (and lose) against Trump in the last 35 years.

The USA Today report found Trump has been involved in over 3,500 lawsuits, with non-payment at the center of at least 60 of the civil cases brought against him. Plumbers, painters, real estate brokers, bartenders and dishwashers all sued Trump for failing to pay for their work. Several law firms who represented Trump in these cases have also turned around and sued him over non-payment.

USA Today also found that at one point in the 1990s Trump owed $69.5 million to 253 subcontractors who had worked on his landmark property, the Trump Taj Mahal.

In an interview with USA Today, Trump blamed the contractors who did shoddy work for not receiving full payment.

“Let’s say that they do a job that’s not good, or a job that they didn’t finish, or a job that was way late. I’ll deduct from their contract, absolutely. That’s what the country should be doing,” Trump said, while his daughter Ivanka said “it would be irresponsible if my father paid contractors who did lousy work.”

Trump also tried to distance himself from the lawsuits saying they were “a long time ago,” even though the suits have continued to roll in.

In May, Trump settled with 48 servers at the Trump National Doral Miami who claimed they hadn’t been paid overtime for working a special event at the venue, according to the USA Today report.

Also last month, a judge ordered the Miami golf course and resort to be foreclosed on if Trump did not settle his $30K+ debts with a painter.