Of the 5 congressional seats even nominally in play (PA-6, 7, 8, 12, & 18), Republicans enjoyed a 3rd quarter fundraising advantage in four. Only Manan Trivedi managed to raise more than his opponent, Rep. Jim Gerlach (R-Chester).

A scenario where Republicans maintain 12 of 18 seats Pa. congressional delegation is looking more inevitable – and they may even net one.

Here are the numbers from the most recent FEC filings. The 3rd quarter went from July, August and September, and doesn’t reflect money raised or spent since Sept. 30.

Correction: PoliticsPA originally reported that George Badey had just $123K on hand. He actually had $260K. 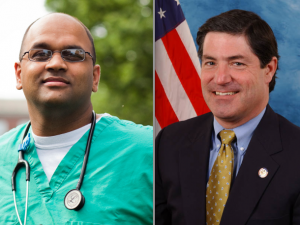 Manan Trivedi is facing Gerlach for the second cycle in a row, and his fundraising experience shows. He brought in $423K and has $282K on hand – the most of any Dem challenger in Pa.

George Badey was on the DCCC’s Red to Blue list this cycle. But that’s about as far as he got. He raised $180K this quarter and has just $260K* on hand – not enough to make a significant dent in the expensive Philly market but 2nd place among challengers in Southeast Pa.

Rep. Pat Meehan (R-Delaware), on the other hand, continued his impressive pace. He raised $406K and has $1.44 million on hand. He may be cutting big checks to the NRCC by next cycle.

If one looked just at the cash on hand figure, one might think Dem Kathy Boockvar is within striking distance of Rep. Mike Fitzpatrick (R-Bucks). She has $201K to his $311K. But that ignores that massive $1.46 million Fitzpatrick spent during the 3rd quarter wreaking havoc on Dem internal polling and Boockvar’s chance of locking down that sweet DCCC moola. (Boockvar spent $598K).

The magic is over for Maggi. Larry Maggi, the Dem challenger to Rep. Tim Murphy (R-Allegheny), raised just $131K this cycle and has $198K on hand. We always suggest taking internal polls with a grain of salt, but this might have something to do with the hard time he had.