Republicans Push Back Against Signs That PA is Off the Table 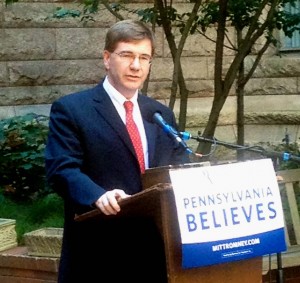 Pittsburgh — The GOP is off the air in Pennsylvania and polls show President Barack Obama leading Mitt Romney by a comfortable margin, but PA Republicans Wednesday insisted that the state is still in play.

“I’m certain Pennsylvania is going to play a pivotal role in the election this year,” said Governor Tom Corbett.

He spoke with reporters during a conference call Wednesday. He said that the absence of television ads isn’t conclusive evidence that the campaign has given up on Pa.

“Any people out there, and I’ve heard it off and on, asserting that a one size fits all campaign effort where advertising dollars on TV are the only factor in the campaign is simply misinformed.”

“My experience back in 2010 was that polls that were reported on in the press very frequently diverged enormously from the polls we were running internally and the kind of numbers that I had confidence in,” Toomey said, citing differences in methodology and other variables.

“I am very skeptical about a lot of the polling data that I have seen. I’m just very confident that right now this is a very close race and by election day it’s going to break for Romney.”

It’s a tough case to sell, as both men had a healthy television presence and lead in the polls at this point in the cycle during their successful campaigns in 2010. After all, the people who decide where to spend money on television ads have no shortage of internal polling.

Neither the Romney campaign nor any major Republican PAC or super PAC is currently on the air in Pennsylvania. Following suit, Democratic groups have also pulled out. According to the Real Clear Politics average of Pa. polls, Obama leads Romney by 7.7 percent, 49 percent to 41.3.

Instead of TV, Republicans recently have emphasized their program to mobilize supporters in recent days in the hopes that national campaign developments will put Pa. in more serious play closer to election day.

The Romney campaign named its area leaders across the state on Wednesday, including three men at a Pittsburgh press conference who insisted that the GOP is focused on getting out the vote.

“There is great investment in Grassroots efforts to get out the vote,” commented Bill Kirk, the recently named Allegheny County Chairman of Romney for President. “This past weekend alone, we knocked on over 50,000 doors with Romney/Ryan volunteers, and we made over 130,000 calls.”

A campaign spokesman said that the campaign, in conjunction with the PA Republican Party and the Republican National Committee, has 65 paid staffers on the ground in Pa. spread among 25 offices.

12th district congressional candidate Keith Rothfus blasted Obama at the press event, saying, “the President has never in four years, pivoted to jobs.” He reiterated that the Mitt Romney and Paul Ryan ticket would produce jobs for Pennsylvanians and Americans alike.

Rothfus faces Rep. Mark Critz in a district where presidential year turnout is likely to boost the GOP. He  echoed the sentiment that grassroots energy would carry the party to a win.

Alluding to 1980, when Ronald Reagan was behind in most polls yet still came out victorious.  Of his own campaign in 2010, when he lost to incumbent Rep. Jason Altmire by 1.4 percent, he said, “We were number one in grassroots in 2010, with little to no support from the national party.”

He stood behind a Romney campaign placard that said, “Pennsylvania Believes.” Time will tell how much the campaign believes in Pennsylvania.