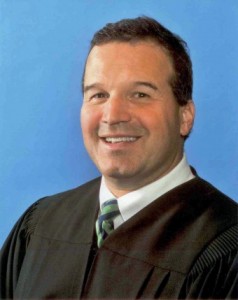 Almost 7 months to the day after Judge Luis Felipe Restrepo was nominated to serve on the Third Circuit of the U.S. Appeals Court by Pres. Obama, the Senate Judiciary Committee finally began his confirmation process.

Restrepo answered several questions from the three senators in attendance, about his previous experience and the two cases in which the Third Circuit Court overturned his decisions.

Upon introducing Restrepo, PA Sens. Pat Toomey and Bob Casey offered their support to the current District Court Judge for the Eastern District of Pennsylvania. Restrepo was unanimously confirmed to that position by the Senate in 2013.

During the short hearing, Restrepo told the senators how he has dealt with conflicts of interest, and said he believed drug sentencing guidelines are “draconian.”

Many on the outside – and even a few on the inside – have called out Republican leadership in the Senate over a lack of judicial confirmations this year, including former Senate majority leader Harry Reid (D-NV).

“This is a blatant rejection of the Senate’s constitutional duties,” Reid said from the Senate floor on Monday.

There is something of a small crisis in the country’s judicial system with 58 judicial vacancies and only 13 nominees pending. 26 of those seats have been deemed judicial emergencies by the Administrative Office of the U.S. Courts.

Yesterday, Sen. Toomey tweeted his support for Restrepo, but still faces criticism for his handling of the confirmation process.

At the beginning of the hearing, Toomey said he hopes Restrepo will be unanimously confirmed again “this year,” sparking concerns over how much longer the process will take.

Other Senators have pushed for prompt confirmations for judges from their states, but it remains to be seen whether Toomey will do the same.

On May 12th, the City Council of Pittsburgh adopted a resolution urging the Senate to confirm Restrepo before another judicial vacancy opens on July 1st.

Before taking his seat on the Third Circuit bench, Restrepo must clear the Senate Judiciary Committee and be confirmed by a full vote in the Senate.