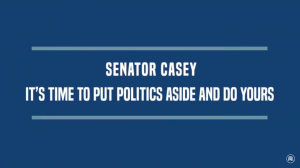 The Republican National Committee is targeting Senator Bob Casey with digital ads pushing him to support an up or down vote on President Trump’s Supreme Court Nominee Judge Neil Gorsuch.

“The Voters Have Demanded An Up or Down Vote In The Full Senate,” the video says on screen.

The video uses only words on the screen to communicate its message, only having music play in the background.

The ads will run on as Facebook videos across the entire state, rather than being targeted to specific geographic regions.  According to the RNC, Casey will be a top target for them throughout the election cycle.

These sorts of ad buys sometimes have a decent amount of money behind them to ensure they get to supporters and help shore up the base, but are used to generate earned media that can put more pressure candidates or officials.

The ad is part of a national effort pushing three parts of Trump’s agenda, Gorsuch’s confirmation, the repeal of the Affordable Care Act, and the passage of the American Health Care Act.

“The RNC is committed to using all our resources to promote these policies and reforms which will benefit all Americans. As we continue to work hand-in-hand with a unified Republican government, I look forward to more opportunities to reach out directly to voters to communicate President Trump’s message,” RNC Chairwoman Ronna McDaniel said in a statement.

Casey released a statement after his meeting with Gorsuch in early February.

“I will continue to review Judge Gorsuch’s record and closely follow his answers to questions during his hearing before the Judiciary Committee in March and in his written responses to questions submitted afterward,” Casey said.

In order for Gorsuch to have the up or down vote, a cloture vote must be taken, which requires 60 votes to pass.  The cloture vote would require eight Democrats to vote to bring the nomination to an up or down vote.  After a cloture vote, the he can be confirmed with a party line vote, since the Republicans hold a majority.  The Senate could also invoke the ‘nuclear option’ which would end debate with the simple majority of 51 votes.