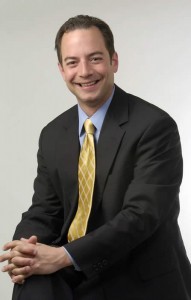 Scott Kraus at the Morning Call reports that The Republican National Committee (RNC) has launched a new video on youtube attacking president Obama’s economic progress in Pennsylvania, New Hampshire, Michigan and Wisconsin.  The ad is likely to be the beginning of a larger Republican push to win Pennsylvania.

“We think that Pennsylvania will be red in 2012,” said RNC chairman Reince Priebus, “I think [Obama] is going to be in big trouble in Pennsylvania and I expect us to win there in 2012. It is a big prize, it is 20 electoral votes.”

Priebus went on to suggest that the President’s performance would drag down other democratic candidates in the state like Senator Bob Casey.  Republicans lack a front runner to challenge Casey.

“I think this fascination with getting fields set so early is something I just am not concerned with,” Priebus said. “We are going to have a candidate and the president is going to drag the democrats all the way down.”

RNC spokesman Ryan Tronovich described the new ad as a “a light buy” that would test “new media and digital strategies” for 2012.

The Democratic National Committee responded, releasing a fact check on the RNC’s video.

“While the President continues to fight to clean up a mess that was years in the making,” said DNC Communications Director Brad Woodhouse. “the Republican Party and its candidates for president are playing politics with our economy… Americans want solutions – and other than negative attacks and working to end Medicare and revive the failed policies of the last decade that nearly sank our economy – Republicans aren’t offering any.”

Tim McNulty of the Pittsburgh Post Gazette reported this morning on a memo from RNC political director Rick Wiley.  The memo outlined Obama’s poor ratings in Pennsylvania.  The memo read in part:

In Pennsylvania, the biggest electoral prize of the four with 20 electoral votes, Obama’s polling has been dismal.  Two surveys conducted in June by Quinnipiac and Susquehanna Polling and Research show his re-elect numbers at 48% and 44% respectively.  Obama’s job approval in the Susquehanna survey was upside down by 7 points (41% approve, 48% disapprove).  This week, Public Policy Polling (PPP), a Democrat firm, released a survey showing Obama again upside down in his job approval – 46% approve to 48% disapprove – and showed him tied at 44% in a theoretical matchup against a candidate for the Republican nomination.

However, other recent polling has cast the President in a more favorable light in PA.