Romney will visit Bucks County on Sunday. Reports the Philadelphia Inquirer, “he is holding a 5:15 p.m. rally at Shady Brook Farm in Yardley, his campaign announced late Thursday.”

Ryan, who campaigned out west in Moon Township two weeks ago, is scheduled to speak to supporters at the Harrisburg International Airport in Middletown on Saturday. Full details of Ryan’s visit are listed below. 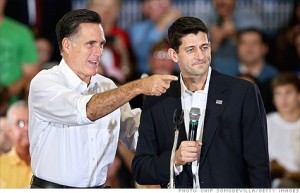 Romney and Ryan’s visits is the cherry on top for a major Pennsylvania push by the GOP. The Romney Campaign and pro-Romney PACs have dumped nearly $12 million in ads to try and sway voters toward the GOP Presidential Nominee.

The Obama campaign is scheduled to counter the GOP ticket’s visit with Biden…Dr. Jill Biden, that is.

According to the Obama campaign,The Second Lady is slated to make a stop in Media on Friday, and West Chester, Norristown, Germantown and NEPA on Saturday. Dr. Biden was scheduled to speak to supporters in PA on Tuesday, however, she cancelled due to Hurricane Sandy. Vice President Joe Biden also cancelled a scheduled visit to Scranton, originally planned for today.

“In an act of sheer desperation, Mitt Romney and Paul Ryan are going all in in Pennsylvania, following the lead of every Republican presidential candidate since 1992 who have made last ditch investments in the Keystone State,” said Bell. “Not one of them carried the state. With less than a week to go and consistently down in must-win states, Mitt Romney’s campaign is desperately trying to find a path to 270 electoral votes with no avail.”

Here are the details on Ryan’s visit: