Romney, Obama Surrogates Hop On The Bus For Statewide Tours 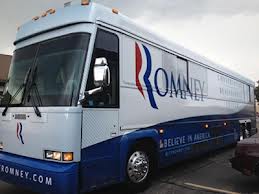 While campaigns across the country are just starting to get off the ground, The Obama and Romney campaigns will be staying on the ground – with bus tours in Pennsylvania.

Surrogates for the two candidates are touring across Pennsylvania via bus, each pitching their candidate to voters.

The Romney-Ryan ticket’s “A Better Future” bus tour launched today, with day one titled, “We Built This.” Five bus stops were planned.

The Obama campaign kicked off their tour Monday, with stops in Erie and Pittsburgh. The “Romney-Ryan Wrong for PA Bus Tour” had three stops slated for today, starting this morning in Altoona.