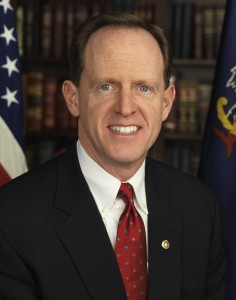 Sen. Pat Toomey Wednesday lent his voice to Mitt Romney’s latest attempt to win back some momentum after his widely publicized “47 percent” comments.

The Republican presidential hopeful’s campaign frequently employs supporters to issue statements on the topics of the day. Today, it’s Toomey.

Here’s what the freshman Republican had to say, in a statement that went out to the Romney campaign’s national press list:

“Americans got a clear look at President Obama’s government-centered philosophy when he told small business owners that ‘you didn’t build that.’ Now we have a glimpse of his long-held belief in redistribution through government. But rather than more taxes and overspending, Americans understand that success comes from a society based on free enterprise, where opportunity abounds and a thriving economy supports upward mobility. They need a president like Mitt Romney, whose policies will create jobs, generate new wealth, and allow people from all walks of life to achieve their fullest potential.”

He was talking about this video, the favorite topic of Republicans since it was uncovered yesterday. It’s billed as a lecture Barack Obama gave in 1998, in which he says, in part, “I think the trick is figuring out how do we structure government systems that pool resources and hence facilitate some redistribution – because I actually believe in some redistribution, at least at a certain level to make sure that everybody’s got a shot.”

Obama’s campaign said the comments in the video were being taken out of context.

“Fourteen years ago, then-Senator Obama was making an argument for a more efficient, more effective government – specifically citing city government agencies that he didn’t think were working effectively.  He believed then, and believes now, that there are steps we can take to promote opportunity and ensure that all Americans have a fair shot if they work hard,” said Obama campaign Press Secretary Ben LaBolt. “Unlike Governor Romney, he doesn’t believe that if you’re a student who applies for a loan you’re looking for a handout.”

The Romney campaign is also holding a press event today at the Port of Philadelphia. Gov. Tom Corbett is headlining, along with State Reps. Bill Adolph and John Taylor.

The Romney campaign has emailed comments from Toomey on two or three occasions in the past, as well. His professional background and personal politics are easy to see as parallel to Romney’s, something Pa. Democrats spokesman James Hallinan noted.

“Leave it to former corporate buyout specialist Mitt Romney to call on former Wall Street raider Pat Toomey to try to change the subject away from his disdainful insults about half the country,” hallinan blasted. “It’s time Pat Toomey put the world view he learned on Wall Street behind him and started working for his constituents – and not just the ones that he and Mitt Romney are courting with their outlandish and offensive rhetoric.”